Jane Goodall travels the world 300 days a year asking the people that come massively to listen to her to take care of the environment. Scientist, activist and one of the greatest chimpanzee experts in the world, Goodall believes that we are still in time to give back to our children the land that we borrowed in better conditions than it is now. Every small movement counts, and conscious individual decisions are the key that will help to preserve the beauty of terrestrial biodiversity.
J

ane Goodall, who is almost 85 years old, travels tirelessly, explaining how important it is to respect our planet and all the living beings with whom we share it. “Don’t you find it strange that the most intellectual creatures that ever stepped on this planet are destroying their only home?”, she asks. This little woman makes her audience cry with emotion.

On December 13th, Jane Goodall visited CosmoCaixa again and told us about her 58 years of research on chimpanzees in Africa. Children and adults had their eyes fixed on her, while she told her life as a series of adventures, discoveries, love and luck.

Goodall is the closest thing to a rock star in the field of science. She says that her voice is tired, that at her age she had to lose something forcefully, and she also reminds us that it is a kind of despair that does not allow her to stop rolling around the world with her activism, always accompanied by Mister H, her cuddly toy chimpanzee. Dr. Goodall is clear that she cannot retire until the world is safe.

When she was a little girl, the Londoner filled her room with dirt and she invited the garden worms to spend some time with her. Rusty, her dog, was the first to teach her that animals have emotions and once, when she was four years old, she hid in a chicken coop, patient and stealth, until she saw how a hen laid an egg. Goodall was fascinated by cows, horses and little pigs. She came into the world with this love for animals and her curiosity did the rest. A scientist was being born. Since then, she never stopped reading animal and Tarzan books, and walking around the London Museum of Natural History.

While she was in Africa, her commitment and practical knowledge along with her gift to treat animals convinced the Kenyan palaeontologist and archaeologist Louis Leakey: the 26-year-old woman who had never been to university and who did not know what ethology was -the study of animal behaviour- was the right person to investigate the behaviour of chimpanzees in Africa and discover if we derived from a common ancestor. And, although the first few months were very frustrating, because primates fled at the sight of her, little by little they lost their fear, and she began to name them (David Greybeard, Goliath, Gigi, Flo) instead of merely assigning them a number in her studies.

Goodall proved to the unbelieving scientific community of her time, thanks to the recordings of Hugo Van Lawick, that chimpanzees, just like humans, create tools to provide themselves with food. She discovered that they also have personality and are able to display rational thinking and emotions such as joy, sadness or anger. She observed hugs, kisses, slaps on the back and tickling, evidences of affective relationships between members of the same family or community. She suggested, in short, that we are not so different from them. “Those were the most amazing days of my life. I could spend hours alone in the jungle. It was when I began to learn that all life in the jungle is interconnected”, says Goodall.

In 1977 she founded the Jane Goodall Institute. “The time had come to do something for animals and for nature, which had done so much for me“. Later, in 1986, she helped to organize a conference in the United States that talked about illegal hunting and about chimpanzees brutally abused by the entertainment industry and the circus, as well as deforestation and commercialization of animal meat for human consumption. Goodall understood that she had to help the populations that lived in those places. “If we did not do something for people to find alternative ways to survive, that did not destroy the environment, we could not save the chimpanzees either.” 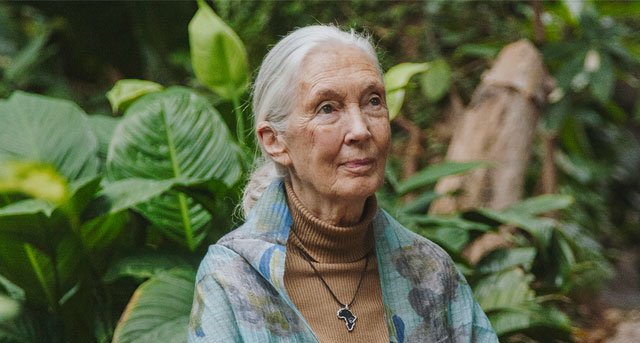 It was in 1991 when a group of 12 young people from Tanzania approached her, worried about what was happening in their environment, and Roots & Shoots was born. Now there are more than 80 countries that have projects carried out by young folks and based on the protection of animals, the environment and people. The key message is that “each of us, every day, leaves a footprint on our planet, and we have to choose what kind of footprint we want to leave”.

Jane Goodall ended her CosmoCaixa conference giving us four reasons not to lose hope: young people, our brains, the resilience of nature and the indomitable human spirit. When she finished her talk, the queue for having a picture taken with her or having a book signed by her lasted more than an hour. She did not stop smiling, sitting on a table, swinging her legs and her black loafers. As Mia, a smiling 8-year-old admirer, told us: “Jane discovered a lot of things. She has done a lot for all humans”.

A tree in the city is much more than ornamentation...

The Yes! Programme of the SHE Foundation, a school intervention...

With telescopes installed in Ciència Square and with the support...

“Barcelona is currently a city with 150 wild animal species,...

We forget songs, loves and trips. Maybe, because they did...

A longer life expectancy throughout the planet is something that...