The lower ground floor of Mercat de Sant Antoni looks spectacular now: it includes the inevitable supermarket –that supplies the main funding for the market building– and caters for the maintenance requirements and needs of the walls of the Baluard de Sant Antoni, one of the bastions in the medieval wall. The market also hides inside a piece of the Via Augusta with the original pavement, nothing less than the typical two-thousand-year-old relic.

he life cycle of a market can be compared to that of a person: birth, growth, reproduction and death. In this article, there will be no deaths –yet it is worth recalling the latest victims: the Markets of Carme and Núria– and we will not theorize about sex in the Boqueria market, which apparently there is plenty of in its side alleys. Our focus today will be the marketing expansions and downfalls as a result of the re-opening of Mercat de Sant Antoni.

Since I love the smell of gentrification early in the morning, these days I have been several times to the Sant Antoni’s market. The freshly-pedestrianised Tamarit and Comte Borrell –if we are allowed this novel coinage– look beautiful, with hosts of old people and children sitting on benches and terraces, in an image that anticipates the super-island. And the market itself is the jewel in the crown. The outer shell, spectacular, displays repainted golden valances and the iron pillars still show the sign reading “La Maquinista terrestre y marítima de Barcelona”, from when the metal industry was made locally.

Inside, everything has changed in a way that nothing has changed: nine years later, the corridors inside the market are fully stocked with veggies, bacon and fish, glittering under powerful LEDs, while the corridors leading to the exit doors contain the flea-market stalls of Encants, and you will swim in a sea of pyjamas, bras, underpants and briefs, 3 x 5€. We can say, for those of us who come from a tradition of square-shaped markets –e.g. Hostafrancs, Ninot or Estrella: in other words, most of us– this beautiful cross-shaped floor of Sant Antoni or Galvany Markets has always fascinated us. On the street, the marquees host again the Sunday market of second-hand books, as the Mercat de Sant Antoni is the only market open seven days a week. 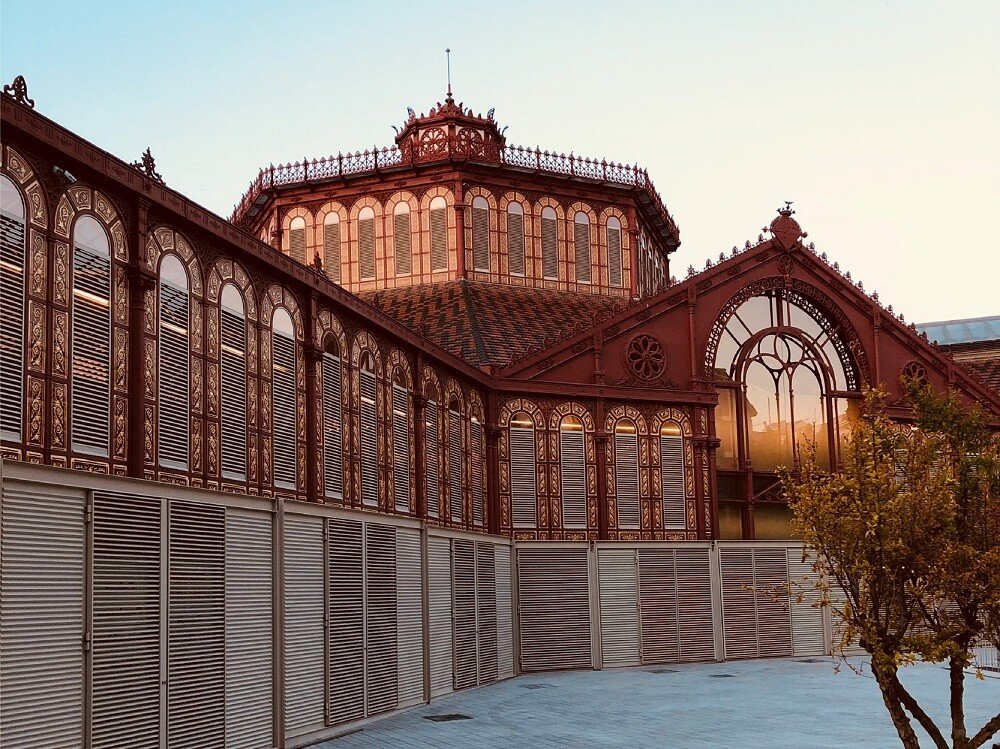 The lower ground floor of Mercat de Sant Antoni looks spectacular now: it includes the inevitable supermarket –that supplies the main funding for the market building– and caters for the maintenance requirements and needs of the walls of the Baluard de Sant Antoni, one of the bastions in the medieval wall. The market also hides inside a piece of the Via Augusta with the original pavement, nothing less than the typical two-thousand-year-old relic. Everything has been paved with a sort of slick micro-concrete, which has resulted in an improvised unofficial local skateboard track. In the market, lots of tourists swarm around stalls of ready-to-eat fruit and have some wine at the wine-tasting bar –gosh, what a combination!–, and this is, precisely, the big issue behind this re-opening: will the Mercat de Sant Antoni fall prey to the tourist market or will it survive without it?

In Gràcia, these days the stall owners of Mercat de l’Abaceria are asking themselves another type of questions. Their market is dying slowly, waiting for a long-delayed renovation, and too many stalls have shut up and been converted into warehouses or book cemeteries. The few shopkeepers who still hold on, already have a removal date, and looks that after Saint John’s fest they will be moved to a temporary location, the upper end of Passeig de Sant Joan, where they will face the transition years before they return and open up again after renovation. Nuri, from the ancient Peixos Blasco, is concerned that, if the renovation takes as long as that of Mercat de Sant Antoni, she will have to retire before she goes back to Travessera. That’s considering they do not come across Roman remains while excavating, as this would mean extending the three years of renovation to many more. However, in Gràcia, they are not concerned about increase in prices of this district after the renovation: Gràcia has been a gentrified district for years.

From the vantage point of the benches in Jardinets de...

In music, silence is just as important as sound. The...

Women became icons of the French Revolution, either belonging to...

The artist Leopoldo Pomés has just been awarded with the...

The years have gone by and many of the promises...

Not all philosophers know how to distance themselves from abstraction...

Becoming pregnant seems easy, but it is not so easy....

Every time there is a basketball game of the “Copa...

Photographer, Audiovisual maker and Art director, her images are an...

The interest of Jaume Tresserra in fine materials, handmade traditional...