Present in space since the origins of art, sculpture takes us from primeval weapons to divine representation, with the energy of a world that becomes more real -and ideal- than reality, between balance and anguish in pain, from play to guilt in its timeless and perfect forms 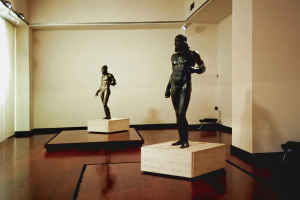 The Warriors of Riac

I travelled to Reggio Calabria to witness the two colossus discovered on the seabed of the Ionian sea, buried under the slab of eternity. Haughty giants who would make good basketball players, heroes from Antiquity of whom we know next to nothing. Who created them? Who do they represent? It doesn’t really matter. The only important thing is their powerful image and the time, imposing itself, colossal, like a fossil in bronze.

The eleventh edition of the Barcelona Art Fair featured the...

Carlos Pazos, a modern-day dandy born in Barcelona in 1949...

The success of the exhibition that the Macba has devoted...