The industry 4.0 project will be housed on land and units on the Zona Franca Industrial Estate in Barcelona, with business and technology partners creating a highly effective network to optimise opportunities for growth and industrial implementation.

Under the leadership of the Special Delegate of the State, Jordi Cornet, El Consorci de la Zona Franca de Barcelona (CZFB) has entered a new phase, whose strategic aim is to assist small and medium-sized enterprises to act as a catalyst for transforming their production into industry 4.0, speeding Barcelona towards a recovery of its international position as a node in the new globalised economy.

The project already has public tenders in the pipeline to build units for industry 4.0 and SMEs on a complex in the heart of the Zona Franca, on the corner of streets 3 and A, occupying two areas totalling 43,000 m2 on the site of the former SEAT factory

The industry 4.0 project will be housed on land and units on the Zona Franca Industrial Estate in Barcelona, with business and technology partners creating a highly effective network to optimise opportunities for growth and industrial implementation. 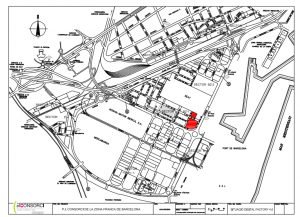 Initially, the accelerator’s units and prototypes will be located on the headquarters of El Consorci, but the project already has public tenders in the pipeline to build units for industry 4.0 and SMEs on a complex in the heart of the Zona Franca, on the corner of streets 3 and A, occupying two areas totalling 43,000 m2 on the site of the former SEAT factory. A total of €10 million will be invested in 2018, and the total investment required will be between €25-30 million.

To ensure that these transformative projects have the maximum impact, the corporate organisation has been restructured with the appointment of a new general manager, Blanca Sorigué, hitherto international expansion manager and director of the SIL International Logistics Exhibition. The general secretary, Anton Ferré, is also a member of senior management, which will also have a 4.0 director, who is currently being recruited by a headhunting firm.

El Consorci’s change of course toward the new economy and the development of transformational activities to promote Barcelona’s production in the global economy comes at a particularly crucial time, as industry recovers its importance as driver for exports. This makes it necessary to strengthen technological infrastructures toward digitised, industrial production where companies have the resources to invest in capital goods.

El Consorci is undertaking this investment stage after transforming itself in recent years. After refocusing its business, revitalising the commercial side and containing costs, it has achieved a far lighter, more efficient structure, reducing expenditure by €13 million (24%), cutting financial debt to €44.8 million and downgrading the value of its assets by 47%.

CZFB’s reaction to the economic crisis and an average reduction of 30% in rental prices received high scores from the business community, as did El Consorci’s commitment to defending business interests in general.

Full occupation does not mean full production, since many sites are still in the planning application or project stage. These include reclaimed land from the old SEAT factory, a vehicle manufacturing plant that is still operating in the Zona Franca, whose units have been concentrated to free up land.

The industrial estate measures 6 million m2, which is equivalent to 6% of the municipality of Barcelona, and the organisation’s strategic plan aims to optimise the use of this industrial area with its own customs zone to make the most of Barcelona’s innovative potential and its superb location alongside the Delta connectivity infrastructures, an international production node because of the booming trade in the global economy.

It is therefore improving urban and technological aspects, with fibre optic cabling throughout the territory, transforming LED lighting, deploying a heating and cooling circuit and reclaimed water for industrial uses. It is expanding green areas and improving mobility with the arrival of the metro to the area and new bike lanes on main road.

This is the first Spanish industrial estate to achieve quality certification in its common areas, and El Consorci is about to launch a circular economy project in the area for business collaboration, energy savings and to take advantage of the resources available in the territory. Last year it received a Bronze from the European Union for having complied with EMAS environmental regulations on the estate for five years, among other good governance certifications.

El Consorci is a public company financed entirely with rent generated by industrial property on the Zona Franca Industrial Estate and asset management. Focused on economic development, its plenary decisions reflect a spirit of public-private cooperation. The governing body of the organisation includes representatives from the Spanish Government, Barcelona City Council and the city’s main financial organisations.

In a world where the frictions generated by inequality problems...

The off-MWC fills the city with parties and parallel events...

Silicon Valley is playing at the top league and the...

We all more or less know what gender equality means,...

“The New Barcelona Post” wanted to know the opinions of...

The progressive rolling out of this technology brings us closer...

The gap is greater in annual bonuses. In addition when...

Cruïlla is the first music festival in Spain to go...

The City Council has led the study "Barcelona in the...

Mobile World Congress is an unclear name. I don’t know...