The Catalans living in the UK were unaware that on 23 June 2016, their British counterparts would decide to vote in a referendum to facilitate the exit of their country from the EU, and that their referendum would end up in a favourable result for this option, with 52% for and 48% against Brexit. What will happen from 2019?

hat will happen from 29 March 2019, the date when the Brexit will finally come into effect? Great uncertainty and doubts spring to mind on EU residents in the UK. There is a large community of Spaniards living in the UK: on their daily basis, they are busy enough with their daily duties and targets; some of them work, others study to get a degree, others are set to make headway on a perpetually unfinished business, i.e. learning English, and others are seeking fortune abroad, hoping to make their dream come true, everybody with their lives and hopes.

What they were unaware of is that on 23 June 2016, their British counterparts would decide to vote in a referendum to facilitate the exit of their country from the EU, and that their referendum would end up in a favourable result for this option, with 52% for and 48% against the Brexit.

March 2019 is drawing near and their doubts and uncertainties are coming to the fore, day after day. One day because the thought comes to their minds, the other because a friend or workmate happens to talk about it 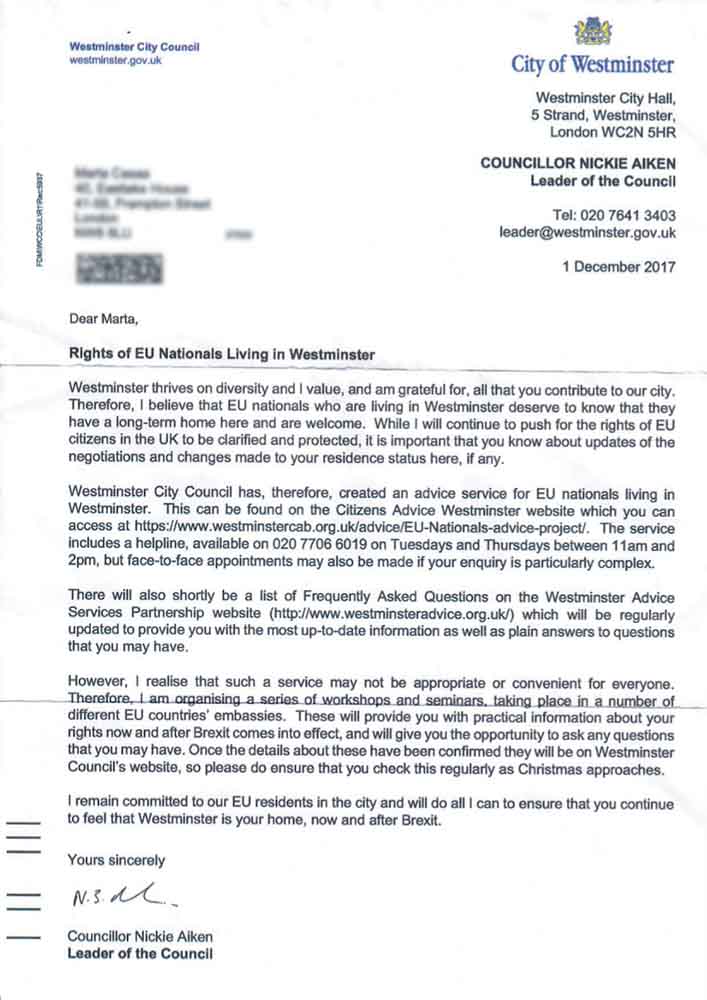 On 29 March 2017 the UK officially announced the European Council of its intention to abandon the UK after triggering the process on invoking Article 50 of the Lisbon Treaty. On 19 June started the first negotiation round between the European Commission and Theresa May’s government. At once, the UK government reassured its residents from the rest of Europe by sending bulletins by postal mail –here, an example– saying that this would not have any negative effect whatsoever. And, although in the beginning everything seemed to crumble, shortly after most people continued with their lives and tried to think as little as possible about the Brexit.

March 2019 is drawing near and their doubts and uncertainties are coming to the fore, day after day. One day because the thought comes to their minds, the other because a friend or workmate happens to talk about it, casually.

Recently something has started moving on, as regards Brexit. It is a popular and frequent topic in papers, as well as in cocktail party conversations. Although there are deals between Theresa May’s government and the European Commission, it is true that they are being extremely hard and, unfortunately, no solution looming on the horizon.

In the meantime, the Spanish Embassy has opened up a space to answer enquiries from Spanish citizens living in the UK on the Brexit and its consequences. The Spanish Embassy in London has included a FAQ link on Brexit in its webpage as regards medical care, employment, social security and retirement, drafted by the Department of Employment and Social Security of the Spanish Embassy.

As regards the European Commission, on 12 December 2017, a document was issued on questions and answers about the future after Brexit: “Questions and Answers – the rights of EU27 and UK citizens post-Brexit, as outlined in the Joint Report from the Negotiators of the European Union and the United Kingdom Government”. This document states that all citizens living in the UK during Brexit will be subjected to the same conditions of residence required by existing UE legislation, but will have to ask for “special status”. Obtaining this status will be made on the basis of the exact same conditions set out in the Free Movement Directive, which confers a right of residence for up to five years on those who work or have sufficient financial resources and sickness insurance, and then a right of permanent residence on those who have resided legally for five years.

THE BIG ISSUE IS: HOW WILL THIS END UP? WHAT WILL HAPPEN TO THOSE CITIZENS WHO WANT TO EMIGRATE AFTER BREXIT?

In the worst-case scenario –i.e. no satisfactory agreement were eventually reached– British politics would be left in a predicament. Possibly, May would end up resigning and the UK would endure a period of isolation caused by customs duties and tariffs, as well as restrictions on free movement outside the UK. Not to mention the great difficulties with Northern Ireland, which would be severely isolated. As regards the possible economic consequences of Brexit, the cost estimated for the UK is simply enormous. Another disadvantage for the country would be a more than likely talent drain, which has already started for UK-based companies relocating to other European cities like Paris, Dublin, Milan or Amsterdam.

For those citizens who want to move to the UK after Brexit, according to the Financial Times, May could restrict these services to high-skilled workers, and according to the British premiere: “It will be a skills-based system where it is workers’ skills that matter, not where they come from. It will be a system that looks across the globe and attracts the people with the skills we need.” In other words, the UK would then become a country where only highly-qualified workers could reside, as they would be endowed with the skills that the UK requires.

There are also other more positive options, but certainly Brexit is, for the time being, a thorny issue. Until further notice, we ignore whether we will manage to walk at leisure or will have to take a new path.

The idea of ​​happiness (modest but real) attributed to the...

Nowadays, advertising uses social relationships as a bait, leaving aside...

There is a mood in the air among the inhabitants...

Every time there is a basketball game of the “Copa...

Among many theories about the year 2100, if anybody, weak...

Today, the respected financier who seemed to have the Midas...