If we knew that 17-23% of European Venture Capital Investments were focused on AI & Deep tech, we would look at deep tech through different eyes. Deep tech companies use pioneering technologies to solve complex problems, for example, artificial intelligence, but also robotics, autonomous vehicles, computer vision, voice recognition, augmented reality or virtual reality. They encompass many areas ubiquitous in all sectors, including finance, transport, e-commerce, gaming and healthtech.

Investment has soared from €4 million in 2012 to €4600 million in the first three quarters of 2017, Artificial Intelligence, Deep Tech and Venture Capital in Europe. Dealroom.co, the platform for data, analysis and investment of technology companies and venture capital has catalogued some 3000 deep tech companies.

WHICH STARTUPS ARE GETTING THE BIG INVESTMENTS?

Number one, Roivant Sciences, a Swiss biopharmaceutical company founded in 2014, received an investment of $1.1 billion from Softbank and Founders Fund in August 2017. Last September, Roivant presented Datavant to improve clinical trials with artificial intelligence, specifically focus on accelerating the discovery, development and marketing of new medicines through machine learning.

Number two, Improbable a British gaming company that focuses on large-scale simulations in the cloud, allowing unprecedented virtual worlds in scalability and complexity, attracted $502 million in May 2017. Creator of the SpatialOS game development platform, they have offices in London, Washington DC and San Francisco.

By countries, the United Kingdom clearly stands out from 2012-2017, with 839 financing rounds and a total of 3400 million euros invested.

Number three, the British fintech Oaknorth Bank received two investment operations at the end of 2017, a total of $318 million from The Clermont Group, Toscafund, Coltrane and GIC. Oaknorth claims that they received the highest fintech investment round in the UK. ACORN Machine, the platform behind Oaknorth focuses on improving the global market for loans to SMEs through machine learning and artificial intelligence.

WHO ARE THE MOST ACTIVE VC INVESTORS?

Companies developing products and services linked to these areas of knowledge are constantly watched not only by venture capital entities but by all sectors of the economy.

The first four are based in Europe and Horizon Ventures is based in Hong Kong and specializes in investing in startups with disruptive technologies.  Included in their portfolio are: Improbable, N26, Windward, Teralytics, Jobspotting and Summly. Deepmind was in the portfolio but was acquired by Google in 2014.

Three of the most active corporations Siemens, Bosch and KFW, have their headquarters in Germany. Credite Agricole (Montrouge, France) and Cambridge Innovation Capital (Cambridge, UK) are also on the list.

UiPath is a software company for Robotic Process Automation (RPA) that allows companies to configure robots for specific processes. Created in 2005, they began their international expansion when they received seed funding in 2015. Currently they are based in London, New York, Paris, Bucharest, Bengaluru, Singapore, Tokyo, Munich, Amsterdam, Dubai and Washington.

N26 is a German bank based in Berlin with an European banking license offering its services to 17 Eurozone countries. The main objective is to invest in product development, doubling its focus on the use of artificial intelligence to improve personal banking.

WHO ARE THE TOP ACQUIRERS?

The most significant European startup acquisitions, based on the amount of the transaction, were made by Chinese and American companies. 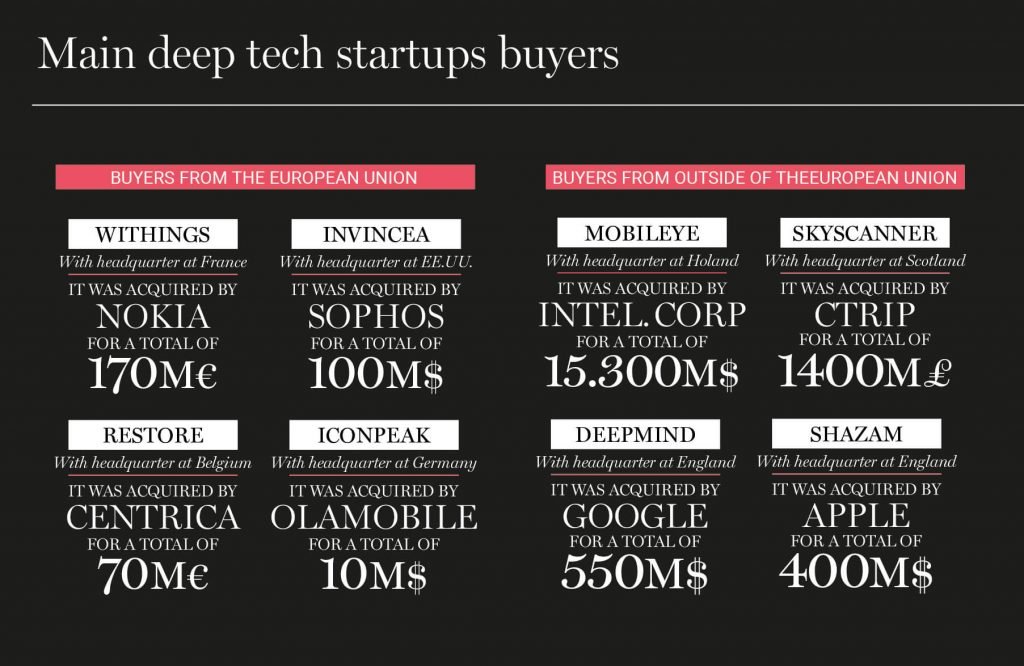 Mobileye (based in Holland) is a global leader in the development of artificial vision technology for cars and was bought by Intel Corporation last August for $15,300 million dollars.

Skyscanner (based in Edinburgh) is a global search engine that compares flights, hotels and car rental  and was acquired by Ctrip, the largest travel portal in China for £1,400 million (about $1900 million) at the end of 2016.

Shazam (based in London) applies artificial intelligence techniques to identify music was acquired by Apple in an agreement worth $400 million last December.

Back in 2014, Deepmind (UK) and Clear2pay (Belgium), both valued at around $550 million, were bought by Google and FISGlobal, respectively.

According to Dealroom.co, investment per inhabitant in the United States continues to be eight times higher than in Europe (excluding buyouts, secondary transactions, debts, loans and ICO’s). Investment ranges from $30 per capita in Europe ($20 in Spain) to $250 in the US, and over $350 in Israel. A clear opportunity for European deep tech investment to grow.

Catalonia, followed by Madrid and the Basque Country, are the...

Almost a sexagenarian, this start-upper and president of 8wires and...

Banco Sabadell, with the collaboration of the University of Barcelona,...

It is a man’s world. Even though the number of...

These new professionals are amongst the most sought after, both...

Barcelona hosts this November 29th its first edition of the...

CaixaBank and Microsoft promote the WONNOW Awards, a prize to...