In addition to being an accurate reflection of society, fashion is an extremely important way to convey power. Depending on who wears it and for what purpose, it can bring backsliding and submission or progress and freedom. On the occasion of International Women’s Day, we have chosen ten moments when clothing and feminism have joined forces to combat repression and issue a cry for equality. Because as the writer Chimamanda Ngozi Adichiela so aptly put it, and as Dior wrote on a t-shirt, “We should all be feminists”.

They smoke, drink and talk with the men

Women’s brief foray into the workforce in World War I and the feeling of carpe diem that came in the wake of the horrors of that conflict led to the emergence of women who wanted to be taken into account not only in terms of civil rights but also in everyday life. The flappers’ first aesthetic act of protest was to exchange the corset for girdles that held in any feminine shape. And over these artificially androgynous bodies they wore straight dresses with low hemlines that left their ankles exposed when they danced or ran. Flappers like Zelda Fitzgerald painted their faces with bright makeup and strung dozens of pieces of jewellery and beads on top – a trend that until then had been the exclusive province of prostitutes. They drove, drank and smoked in public, which was unheard of at the time. They cut their hair and imposed the garçon and bob styles, which became the look of the epoch.

Designing for an active woman

“Until now, clothing has been designed for women of leisure, while I design for an active woman,” said Coco Chanel. And she accomplished this and more. The French designer put an end to all the aesthetic clichés on the value and independence of the female gender: “In my youth, women didn’t seem human. Their clothing ran counter to nature. I gave them back their freedom. I gave them real arms and legs, movements that were real and the possibility of laughing and eating without necessarily fainting.” The shortlist of her innovations includes the petite robe noire (little black dress, which could be worn from morning to evening without having to change for every occasion), pullover tweed jumpers and sweaters, low heels, smaller ladies’ hats (“they looked like ridiculous birthday cakes,” she would quip), the 2.55 bag (the first with a chain so the hands could be free) and the creation of costume jewellery (allowing women to purchase accessories without depending on their husbands or their social status).

In the 80s, women entered universities and career women appeared, that is, educated women aiming for the executive positions that had formerly been the sole preserve of men. Women emulated the aesthetic of their male colleagues with suits, large shoulder pads and button-up shirts to create an image of seriousness and authority. That was the heyday of Armani and his power suit.

I’ll wear a skirt when I go to your funeral

When would she wear a skirt, the journalist Barbara Walters asked the

great Katharine Hepburn. Without so much as batting an eye, the actress answered: “When I go to your funeral.” Take that! Unlike her fellow actresses, Hepburn had never allowed any producer or director to change her style (of thinking or of dressing): pleated trousers, men’s shirts, turtlenecks, loafers and hardly any makeup. In this she was quite similar to Marlene Dietrich, who embodied the androgynous style of the 30s, sowing controversy and getting ahead of her time. The German actress wore ties, bowties, Oxford shoes, men’s hats and mannish suits, without any alterations, by the German tailor Knize, the favourite of Europe’s dandies of the era.

Trousers did not start to become common for women until the 60s and 70s (dovetailing with May of ’68). In 1966, Yves Saint Laurent unveiled the women’s tuxedo, which immediately became a hit. As Pierre Bergé aptly summarised, “Chanel gave women freedom; YSL gave them power.”

“With an attitude like that, you keep civilization back a thousand years”

“With an attitude like that, you keep civilisation back a thousand years,” blurted out Diana Vreeland when she saw the backwards reactions of her colleagues at Harper Bazaar when the bikini was unveiled. This fashion editor was one of the first to predict that the (re-)invention of the bikini in the 50s – in ancient Greek, two-piece sets were used as comfortable clothing for female athletes – was going to be “the most important thing since the atom bomb.”

While in the early 20th century, the police watched over the beaches with a measuring tape in hand to stop anyone who might be an “exhibitionist”, in 2016, after the Nice attacks, a woman dressed in a burkini was reprimanded by agents for covering up too much… France, battered and weakened by the jihadists – morally as well – considered banning the burkini, but ultimately it understood that passing more laws on female clothing would only signal a victory for extremists and would be a huge blow to freedom for all French, European and Western citizens.

We want to be what we are 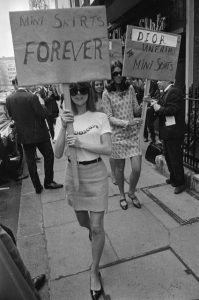 In the first half of the 20th century, skirts kept getting shorter. The dances in the Roaring Twenties and women’s influx into sport contributed to women showing ever more leg. But there had never been skirts above the knees until the early 60s. With the slogan, “We want to be what we are,” Mary Quant’s miniskirt not only questioned what was socially acceptable for women, but since it also dovetailed with the birth control pill, it became the prime sartorial symbol of women’s sexual liberation.

The 20th century opened with the introduction of the empire cut. Madeleine Vionnet, Jacques Doucet, Paul Poiret and the Spaniard Mariano Fortuny, with his pleated Delphos gown (1909), gave women a breather by reviving the Grecian-style cut. Corsets began to fall out of fashion as the struggle for women’s liberation gained momentum.

On the 8th of September 1968, the Washington Post published a fake news story in which it claimed that a group of women who were protesting in New York against the sexism of beauty contests had burned their bras. This gesture, which actually never happened because they could not secure permission from the authorities, ended up becoming a shining symbol of the feminist revolution. Today, when platforms like Facebook or Instagram continue to ban any pictures showing female breasts from being posted, the initiative on this matter is #FreeTheNipple.

From unisex to genderless

First, in around the 60s and 70s, it was called unisex fashion. Today, on a more conceptual basis, it is called genderless or neutral fashion, meaning roomy, versatile, comfortable clothing for both sexes. Even though today the trend is reaching the racks of Zara and H&M, the benchmark designers in this tend were the Japanese Rei Kabakubo (Comme des Garçons) and Yohji Yamamamoto in the 80s, the Belgian designer Ann Demeulemeester in the 90s and the American Rick Owens in the noughties.

I’m wearing black and you ask why

The suffragists in the early 20th century not only adopted a refined, romantic style which muted their combative message; they also created their own colour code to stand out: green for hope, white for purity, purple for loyalty…  But purple is clearly the colour that is the most closely associated with feminism. It is said that the smoke from the fire that killed 129 female workers in the sweatshop at the Triangle Shirtwaist Factory in New York in 1908 was purple while claiming minimal improvements in their terrible working conditions.  However, purple has been joined by many other hues and sensibilities.

With Donald Trump’s ascent to power, a pink pussy hat was chosen to show rejection of the magnate’s insulting attitude and words towards women. And now, for the past few months, the Time’s Up movement has encouraged all actresses and actors to join their cause by wearing black any time they walk the red carpet at film awards ceremonies. On the 30th of January, the Democratic women in the US Congress continued this trend by wearing dark clothing for President Trump’s first State of the Union address. In contrast, the First Lady of the United States wore white. But the colour opposition did not signal a clash with the female Democrats; instead it was decoded as Melania Trump’s explicit support for the cause: the president’s wife wore a white pantsuit, an outfit that was originally for men which Hillary Clinton wore throughout the entire presidential campaign, paying tribute to the US suffragists.

This case is not only recent but also hits not too far from home. We’re betting it will ring a bell… Afred from the TV programme OT and numerous actors and actress attended the Goya awards ceremony wearing a classic men’s suit (the symbol of capitalism and the patriarchy) with the outlines of women’s bodies drawn on them. “My Outer Woman” is the latest project by Ernesto Artillo, an artist from Malaga. The proceeds from the auction of each of the art pieces will be earmarked for different associations that support women.

We should all be feminists

Just a few days ago, during Paris Fashion Week, the first female creative director of the French firm Dior once again turned her catwalk into a cry in favour of the feminist struggle. In 2017, María Grazia Chiuri managed to stamp the title of the essay by the Nigerian writer Chimamanda Ngozi Adichie on everyone’s chest (which also became viral “thanks” to the fact that fake versions of the €500 t-shirt were made and copied endlessly by all the low-cost brands), but this time the models showed slogans on their clothing like “Why have there been no great women artists?” and “C´est non, non, non et non”. Pure marketing strategy? Perhaps. In an industry based on capitalism and voracious consumption, doubt and suspicion will always loom. As we wait for some university to prove the impact and influence of the t-shirts and body-posters (Femen) on our minds, all we are left with is the core message of the campaign: “We should all be feminists”.

The 'Dits Petits' (Small fingers) association is currently composed by...

They are elite athletes, but not everyone perceives them that...

Humanity and her stellar moments: it takes millions of people...

The Tàpies Foundation offers an installation by Albert Serra, “Roi...

All institutions need to bring together empathy and trust with...