Birds are our companions from the very beginning to the end in the cloister of the Monastery of Pedralbes, until night falls. A vital evolution interrupted only by the solemn sound of the bells, that punctual and decisive percussion, with which man tries to impose an order of himself to the inscrutable physis.

he calm of a medieval cloister on a July day, when the dusk is near and one can hear the sound of running water, when the breeze is a caress and the discreet song of the birds, enjoying the coolest hours, is in the air… This is the idyllic setting -as if taken from La grande bellezza– offered by Vespres Musicals, concert series at Monestir de Pedralbes. Impossible not to be carried away by the calm and to feel receptive towards the works excellently assembled in this event, which is entitled “Sounds in space”. A concert eminently dedicated to contemporary creators, from the well-known Morton Feldman and Arvo Pärt to others, which are closer in context -even contemporaries- such as Josep Maria Guix, guest composer of the current season at the Palau de la Música, or the young Joan Magrané. Not forgetting, of course, the rara avis -an inspired and inspiring creator-that was Giacinto Scelsi. Even if their contexts are not always comparable, the interests and understanding of musical creation seem to be perfectly compatible. The chosen works concur in illustrating a certain dialectic between the repetition of cells, through rhythms and tones that suggest a pre-established harmony -the invisible order of reality that is audible, and which the Pythagorean thinkers already conceived- with a taste for improvisation. The opening to the unexpected, no less constitutive of reality, as another pre-socratic, the enigmatic and oracular Heraclitus, already knew.

A good decision, to start with La màquina Celeste by Joan Magrané, a piece for vibraphone brilliantly executed by Miquel Vich. It was the entry into the hard core of an apparently intangible issue. Contemplative music, in fact, but also dynamic, which is perpetuated like concentric waves of varying diameter. Subtle or explicit, rhythmic reverberations that eventually break the expected progression. A work, that one by Magrané that -according to Vich- is inspired in the mystical tradition. It is the first, but not the only piece to do so, in the course of the evening. The sonic manifestation of the invisible, the expression of an ineffable reality with oriental reminiscences seems to ground already Hyxos, composed by Giacinto Scelsi in 1955. A wind instrument is added to the percussion, a flute, which exemplarily declaims the dialectic between emptiness and fullness. The Italian composer, who could spend hours concentrating on a single note and who came to declare himself “a fanatic of silence”, promotes the coexistence of this free flow of air, an invisible element that makes sound possible, with the metallic object struck with greater or less subtlety. The most material, and potentially strident, can be evocative and even poetic; and also, the absence of sound, which enables that piece of pierced wood, become an accomplice of a meaning yet to be determined, with which the listener feels encouraged to come together. And not only are we thinking about people’s reaction: in the cloister of the monastery, the birds provide sonorities, topped by the intrusion of the bell. An unfolding that is the work of the human artifice, somehow reunited with nature. The elements, all, arranged.

After a short pause, to reorganize the instruments of the stage (prepared on one of the four sides of the cloister’s arcaded gallery) a work for solo piano by Josep Maria Guix was played, namely On reflection, composed in memory of Mompou. Unavoidably, silence makes its appearance at various times, being the notes that prepare it no less fundamental: they remain in the air, interpellated with an intentional sense of spontaneity -the above-mentioned characters abound in the allusive character “sounds of space “- in the fantastic version of the pianist Jordi Masó. Then, occurred the most emotional moment of the evening. With the sun about to disappear and a transmuted luminosity in the air, in the sky of a blue-mirror color, the piece Spiegel im Spiegel by Arvo Pärt for piano and cello diluted the physical notion of time, thanks to a beautiful sequence of specular games. Minimalist reflections of a maximum emotional depth, that point directly to the inability of language to determine and fix what there actually is, insofar as it happens. Forty years, now, from its composition, the exact age -in about two months- that is the one writing these lines. Coincidences that a priori do not mean anything, obviously, but following the depth of the pieces played -that, certainly, give a lot to think about- it’s difficult not to become transcendent… and to be affected by that unequivocal lyrism, which obliges oneself to face metaphysical questions. Heideggerian toned questions about being and nothingness, or about a possible first causality, like the one that -for instance- my daughter told me when she was about to turn four years old: “Dad, where was I before I was born?”. 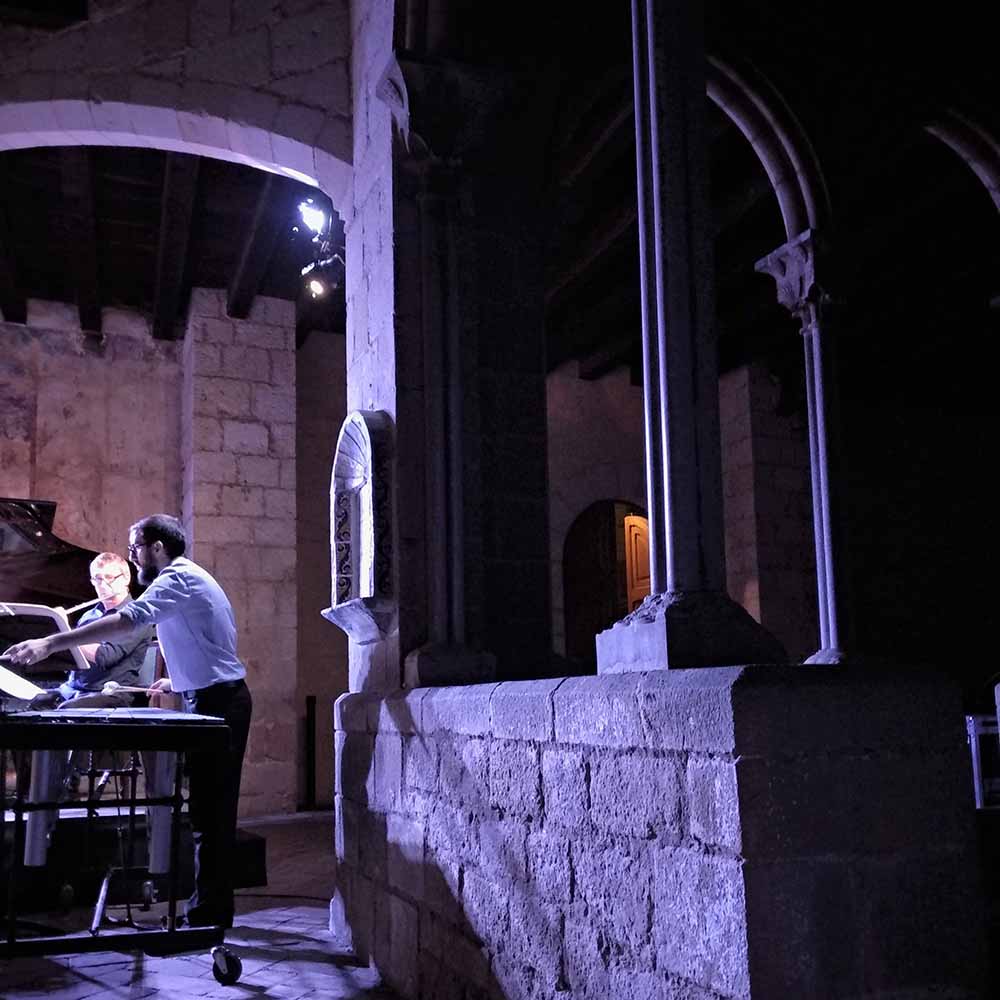 The transmigration of souls -the Pythagoreans’ belief, known as metempsychosis- would be a possible answer to that. Difficult, however, to express it categorically, even to a ductile and perceptive mentality such as children’s, who would find it perfectly plausible. Thinking about music -in physical terms- its propagation in waves also has something essentially mysterious, which is revealed by the other side of sound, by the immovable reality of silence. Morton Feldman in his Crippled Symmetry (Region 1) arranges the dialogue between the three instrumentalists based on individual scores; they must deploy it commonly from a mutual listening, an interaction that creates ex novo the piece. The degree of attention to the own and the other’s sonority turns out to be enchanting; it recalls that certain magnetism of nature that necessarily -but, like improvising- determines what cannot stop its reality as a being. Birds are our companions from the very beginning to the end in the cloister of the Monastery of Pedralbes, until night falls. A vital evolution interrupted only by the solemn sound of the bells, a punctual and decisive percussion, with which man tries to impose an order of himself to the inscrutable physis. To control life, and in the best of cases create beauty. But, shall we remember the captivatingly sinister sentence of Rilke, in the first verses of the Duino Elegies? [“For beauty is nothing but / the beginning of terror, that we are still able to bear, / and we revere it so, because it calmly disdains / to destroy us. Every Angel is terror” (translation by A. S. Kline)]

The musician Clarence Bekker used to play in Portal de...

Luis Miguel, the most popular artist in the history of...

When we talk about a music festival, it is essential...

Brands choose the Cruïlla festival because “we have a unique...

Pablo Heras-Casado, world-acclaimed conductor, has chosen the city of Barcelona...

The best Lady Gaga reappeared in Barcelona after being forced...