The Cruïlla Festival begins on Thursday with an inclusive program full of quality live shows, far from musical purisms, to enhance the discovery effect among the public

The day has arrived. On Thursday, July 12th, in Barcelona’s Parc del Fòrum, begins the present edition of Cruïlla Festival. The schedule is not as tight as the next two days, ideal -in a way- to savor it with the family. An extensive offe r, that prioritizes the experience of the public to the massification and that, according to its director, Jordi Herreruela, strives to offer “an inclusive program: our intention goes beyond pleasing the fans of a specific artist. We expect that he can also awake interest of the people who do not know him. We are interested in quality live music, without musical purisms, to enhance the discovery effect amongst the public“.

This conception necessarily sets up the variety in the program, looking for “a balance difficult to explain between the musical genres: pop, rock, folk, world music, reggae, hip-hop, electronic music… Naturally, he acknowledges, depending on the year, some nuances in the program bring the balance to one side or the other. But they are precisely that, nuances, without any style excessively weighing over the rest. There is a third element that contributes to give personality to this event, and that is related to the place occupied by the artists on the hour grid: “Rhythmically”, Jordi Herreruela reveals, “the different proposals go in crescendo, from the quietest to the most intense. A fact that, at times, makes us schedule artists of great projection in afternoon or evening, since we consider that it is the most adequate, to maintain this logic”.

Expressed, thus, the tenets of the Cruïlla Festival essence, we offer now three possible tours through the program of the 2018 edition. These are suggestions, we must remind, as valid as any other. After all, there are total of fifty-two artists in six different scenarios, and therefore there are many possible routes. 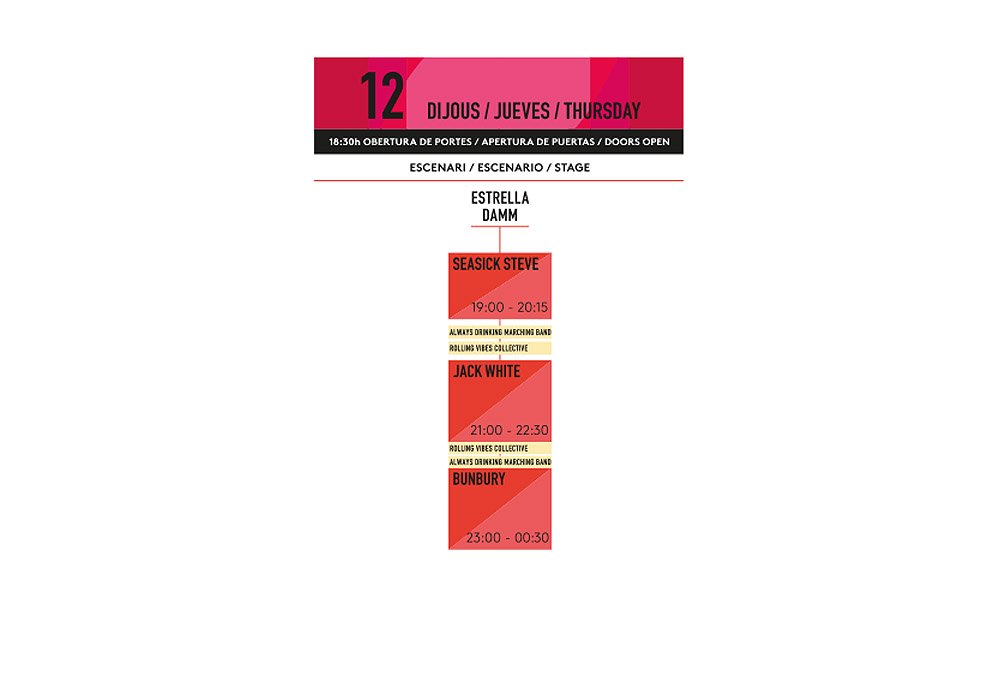 Very quiet day, with only seven artists scheduled on a single stage. The first to step on (7 pm) will be American bluesman Steve Seasick, who plays personalized instruments and stirs his concerts with a degree of madness. Seniority (was born in 1941) and an adventurous life mark the biography of an artist who published his first album in 2004, past the age of sixty. At 9.00 pm, the stellar performance of the day will take place starring Jack White, former member of The White Stripes and The Raconteurs, who premiered alone in 2012 with Blunderbuss. The rocker from Michigan will present at Cruïlla songs from his fourth album, Boarding House Reach, published last March. Late at night (9.15 pm), it will be Bunbury‘s turn and his work at the intersection between poetry and rock. The former leader of Heroes del Silencio, who already visited the festival in 2016, will play songs from his latest album, Expectativas, published in Barcelona at the end of 2017, with pieces such as Cuna de Caín. 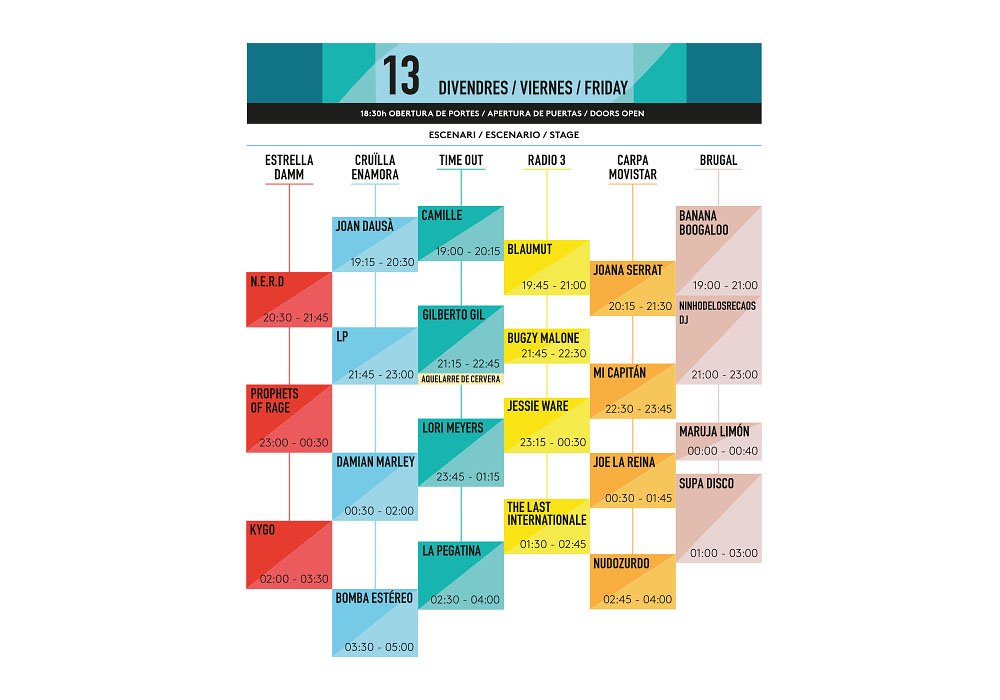 Despite being neighbors with France, artists from that country do not visit us as often as it would be desirable. Luckily, the Cruïlla 2018 includes in its programming Camille, singer-songwriter and actress that will perform on Friday (7:00), opening an intense day of concerts, that will reach the amount of 22. In 2002, this artist started a brilliant solo career, with glimpses at the chanson, pop and experimental universe, and was catapulted as one of the most interesting figures of the continent. She will present his album OUÏ, which appeared in November 2017. Later (9.15 pm), it will be the turn of one of the great fathers of modern Brazilian music, and also former minister of culture of his country, Gilberto Gil. In 1977, Gil published Refavela, an album recorded in Nigeria: a sublime work that, from the first minute, was revered as a classic. With the show Refavela 40, he will remember, among other pieces, the songs of that work, very well surrounded by a populated team of friends. His performance is expected to be one of the most talked about during the summer season in the city. At 11 pm, the festival will host the debut in Barcelona of Prophets of Rage, supergroup composed of elements of Rage Against the Machine, Cypress Hill and Public Enemy. Tom Morello, Chuck D, B-real and the rest of the members of this sextet, promise strong emotions riding rock, rap and vindication, with songs from their first self-titled album, and versions of their previous bands. After midnight (00:30), the lovers of reggae and dancehall have an essential appointment with Damian ‘Jr. Gong ‘Marley, the little son of Bob Marley, who performs for the second time at Cruïlla, presenting the album Stony Hill. Immediately after him (02:00), the Norwegian Kygo, will enhance the dawn with an EDM session, in which the famous Stole the show is not to be missed. 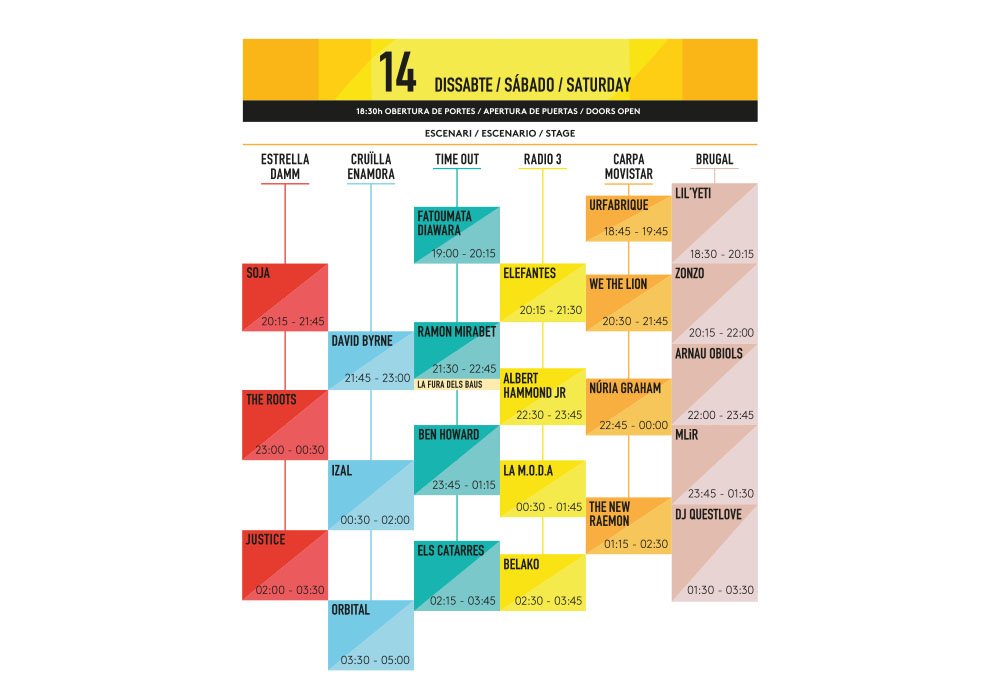 Final day, twenty-two scheduled concerts and a music proposal that starts (7:00 pm) with the talent of singer-songwriter Fatoumata Diawara. Malian, born in Ivory Coast, she can already be considered one of the great ladies of African music, despite not having reached the age of forty. In 2017 she took part in the festival as a member of the splendid show Lamomali, and now she is back to present her new album, Fenfo. At 9.45 pm, we will live one of the great moments of the Cruïlla Festival, with the immense David Byrne, who won the hearts of almost every music lover as part of the Talking Heads, and that has not stopped doing so in his subsequent journey in the world of music and film. Accompanied by a cast of ten musicians and dancers, Byrne will enliven the audience’s senses playing the songs of his eleventh solo album, American Utopia. Next (11:00), The Roots will be the ones to show up. A hip-hop band appreciated by a diverse public, thanks to an intelligent method and concept, that links them to funk, soul and even the jazz scene. They have not released an album in the last five years, but they are working on one that may have its presence in their Barcelona concert. The final stretch of Saturday night at the Parc del Fòrum necessarily involves electronic dance proposals such as Justice (02:00), the French electronic music duo formed by Gaspard Augé and Xavier de Rosnay. Not to be missed, also, are the veterans Phil and Paul Hartnoll, who have returned to life to Orbital (03:30). Tandem that emerged in the nineties, and that is still willing to stir up the scene, since his performance will last until five in the morning, bringing to an end the Cruïlla 2018.

Jordi Herreruela has seen the festival grow from its first,...

Pau Guillamet (Barcelona, 1976) sought peace and focus among the...

In 1988, amidst the Barcelona pre-Olympics, Tablao de Carmen opened...

The Barcelona-based production company Canada has been successful for ten...

The best Lady Gaga reappeared in Barcelona after being forced...