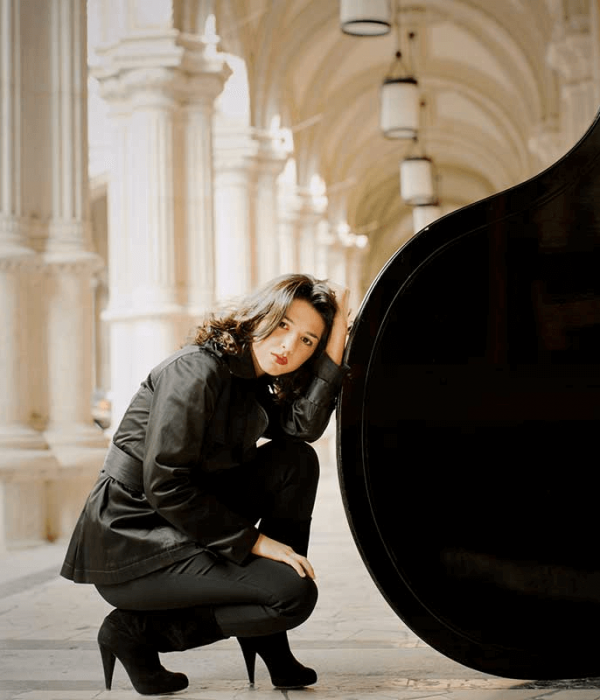 Khatia Buniatishvili, who will be performing during this month in different and important venues such as the Londoner Barbican, on 1st April, or two weeks later at the Museum of Fine Arts in Montréal -offering a solo-piano program, devoted to Schubert and Liszt- can also be admired at the Euskalduna Palace in Bilbao, starring one of the most beautiful Mozart concerts under the baton of Pablo González. Specifically, the Concerto in the major, #23, specially remembered for its slow movement (expressive and minimalistic, seems to announce the romantic work of art). If impressive is the display of the pianist in recital, in the concerts for her instrument -with the obligatory and jocular dialogues between sections- the musicality and power of its sound features are even more outstanding. The organizers point out that the pianist's staging -her inevitable "glamour"- does not shade musical excellence, which places her among today’s best pianists. Already in the second part, the clairvoyance of the director from Oviedo, leading the Bilbao Symphony will also allow one of the most substantial works of Dimitri Shostakovich, the Symphony # 11, "The year 1905", which has been compared to a requiem, and which obtained the greatest public success after the "Leningrad" Symphony. 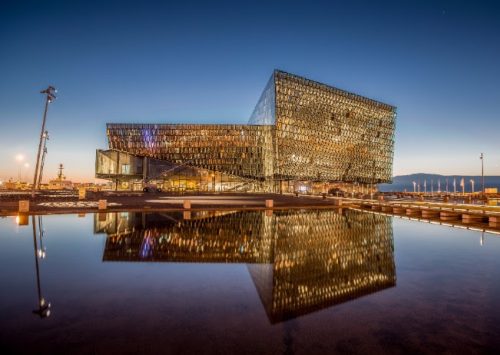 Music, technology and nature gathered in a festival that needs no introduction, especially for the public of Barcelona. Sónar is an international brand that guarantees high intensity

experiences, always committed to the latest musical trends and experimentation. Also in the seventh edition of his organization in Reyjkavik creativity is modulated thanks to new forms of communication, counting on artists such as Fatboy Slim, James Blake, Jamie xx, Ryuichi Sakamoto and Alva Noto, John Talabot, Jon Hopkins, Elliphant, FM Belfast, Exos, Mugison, Sin Fang, Samaris, Bjarki, GusGus, Kiasmos and Ólafur Arnalds -international celebrity, who recently performed in Barcelona- among many others. Impressive the glass facade of the Harpa building by Olafur Eliasson, which hosts most events, in a natural setting -the aurora borealis, and the bays frequented by whales- that transcends any other sensory experience.

Programming Mozart and Mahler in the same concert is the dream of many music lovers, since it represents a kind of compendium of the best Central European tradition, the expression of an ideal and idealized beauty

the explosion and exploitation of a salvific paradigm that reveals, still, the need to believe. Mozart is the melodic prodigy, king of the details and timbre dialogues that goes beyond the classical element -which culminates- to lean out of the properly romantic expression. Mahler, who adored Mozart, amplifies and transcends the expressiveness of romantic pathos, which still beats in him. As chief conductor of the Vienna opera he programmed with delight -for his person and for the audience- such important operas as ‘The Marriage of Figaro’, in which a whole world of emotional relationships is contained. As for his own symphonies, it has also been said that they are something like closed cosmoses. In the present concert two of the best works composed by both are gathered: the 'Piano Concerto no. 22' is the most extensive, ambitious and rich in resources, while Mahler's 'Seventh Symphony' is one of his best examples of monumentality, in which the possibilities of the instruments are taken to the limit and the genres are transformed, reversing a passionate way popular music and music, and in sum showing contributors to the same and unique reality. As if that were not enough, the interpreters who will make possible the confluence of those headlights of the composition -Mozart and Mahler, alpha and omega in inclusive tension- are none other than the pianist Kristian Bezuidenhout, one of the most sensitive to the musicality of the games Mozartians and director Daniel Harding, who at the head of the Orchester de Paris promises to offer a memorable version of Mahler. A concert that is well worth a new visit to the city of light. 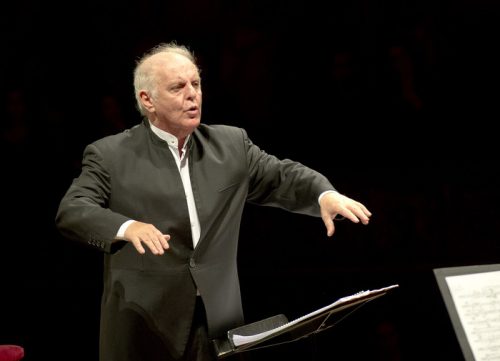 Daniel Barenboim returns to the emblematic Staatsoper Unter den Linden in Berlin. Perhaps it would be better to specify that, in a sense, he has never left, since he has been musical director

since 1992. What is striking about the occasion is that he will not direct any of the Berlin ensembles, such as the Staatskapelle Berlin -with which he has made a great number of performances and recordings - but the no less historical Vienna Philharmonic. The program, at the height of the circumstances, composes the "Classic" Symphony of Prokofiev, dynamic and playful, as well as the first great composition of Gustav Mahler, in which the Bohemian traces a kind of biographical journey to collect the testimony of romanticism and elevate it to the maximum expression, fusing the internal nature with the external one. 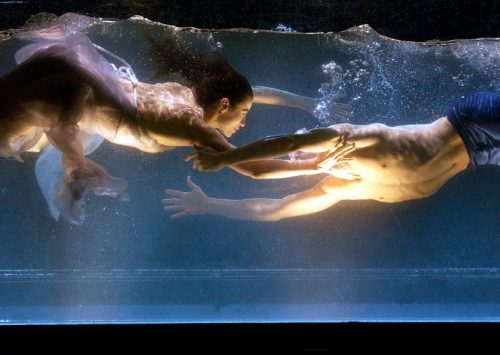 Thus, dancers / swimmers in large stacks of water generate waves with their movements that are visual music, and together with music stir the emotions. A dynamic show, in short, with a multitude of incentives. "Summit of the English Baroque, 'Dido & Aeneas' is staged for the first time at the Teatro Real in a stunning opera and dance production. Recognized by some as the successor of Pina Bausch, Sasha Waltz reinterprets Henry Purcell's opera through its characteristic choreographic language. Christopher Molds conducts the Akademie für Alte Musik Berlin and a cast led by Marie-Claude Chappuis and Nikolay Borchev in the four performances [three of them in April] of this creative and transgressive show". 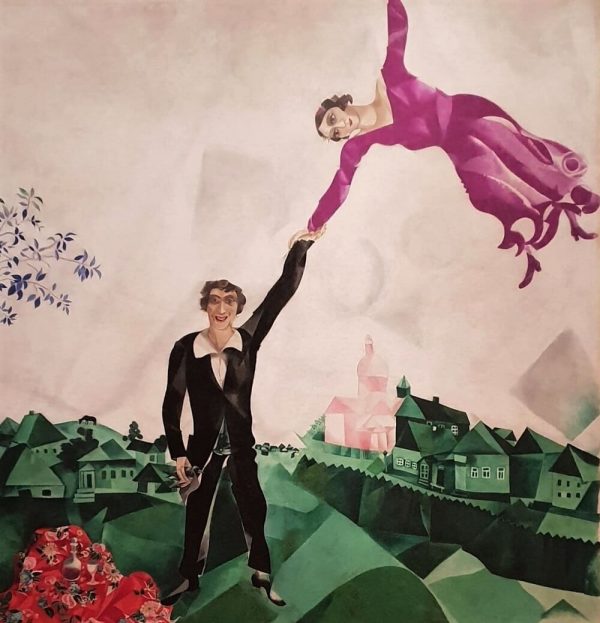 Until the end of the month the Mapfre Foundation offers a show focused on two key Russian artists for the history of art: Marc Chagall and Kazimir Malévich. The organizers specify that both "represent two poles in the innovations of the pictorial avant-garde: the case of Chagall, more poetic and narrative that opens the way to surrealism; the one of Malévich, more radical and tending to the geometric abstraction". They are not the only ones summoned, because "between them is the work of another twenty-seven artists who created paintings and sculptures while answering the fundamental principles of those arts. In the list of creators, it is remarkable the presence of an important number of women artists, whose work was fundamental in the development of the Russian avant-garde before and after the October Revolution”. We are thinking, for example, Natalia Goncharova or Liubov Popova. 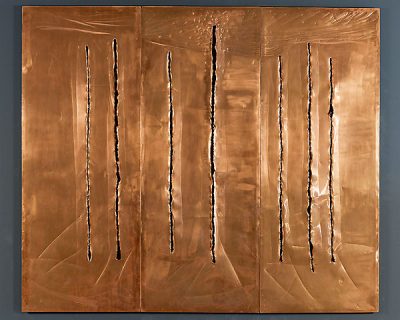 Lucio Fontana. On the Threshold

"On the threshold" ('On the Treshold') is the title of the retrospective exhibit devoted to an artist recognizable and transgressor, even visionary. The material support of his paintings, torn or perforated, manages to convey in the most modest way possible the inexplicable existence of emptiness.

Or perhaps, of the existence of that "other side", for which a priori no spirituality is claimed, but whose possibility is magnified as an unrepentant shadow. The series of exhibitions of the Metropolitan Museum show the evolution of the artist, initially figurative, towards that amazing mode of abstraction. For not only Fontana renounces to the creation of figures, but also questions the very idea of physical support. Through the manipulation of materials emerges a stark absence; the presence of something that is not, and yet is exhibited. An intervention that suggests a form of silenced violence that inexplicably arouses emotions.

For the first time in Austria, the Kunsthistorisches Museum offers a unique exhibition dedicated to Mark Rothko, one of the fundamental names of Abstract Expressionism, which is recognized

above all for its large canvases, paintings with a predominance of a few colours, rich in nuances, being the space is distributed in rectangular forms, although without any aprioristic regularity. One of the strong points of the present exhibition, however, lies in the showing of the trajectory from a symbolic figurativism of the 1930s -which could be reminiscent of that of Fauvism- to the discovery of its own language, already in the 50s and 60s., with works already exempt from any hint of representation. As if it were large doors, windows or openings to another dimension, its colours allow the viewer confront feelings that underlie conscious life. In a letter addressed to Katharina Ku in 1954, Rothko noted one of the dangers inherent in his particular way of painting: " Since my pictures are large, colorful and unframed, and since museum walls are usually immense and formidable, there is the danger that the pictures relate themselves as decorative areas to the walls. This would be a distortion of their meaning, since the pictures are intimate and intense, and are the opposite of what is decorative". In the wonderful web with which the important art gallery presents this fundamental exhibition -until June 30- we can find all kinds of materials, which allow us to contextualize Rothko's creativity and understand its evolution and purposes. There, too, are extracts of an interview in which he expresses the intensity and spirituality of the creative and sacrificial experience, offered for the spectator's purposes with thaumaturgy. "I’m interested only in expressing basic human emotions – tragedy, ecstasy, doom and so on – and the fact that lots of people break down and cry when confronted with my pictures shows that I communicate those basic human emotions (…) The people who weep before my pictures are having the same religious experience I had when I painted them. And if you, as you say, are moved only by their color relationships, then you miss the point!". 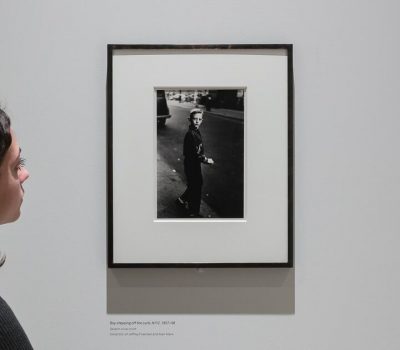 diane arbus: in the beginning

The gaze of Diane Arbus has been celebrated for her keen ability to capture the psychological nuances of the individuals portrayed. Sneaking into the day to day of people, couples or groups, embodied the intimate life of their fellow citizens.

It was Arbus an essentially New York artist, and in fact the Metropolitan Museum is responsible for the present show. As the organizers explain, she "took most of her photographs in New York City, where she was born and died, and where she worked in locations such as Times Square, the Lower East Side and Coney Island. Her photographs of children and eccentrics, couples and circus performers, female impersonators and midtown shoppers, are among the most intimate, surprising and haunting works of art of the twentieth century". In this show, more than 100 photographs are exhibited, "the majority of which are vintage prints made by the artist, drawn from the Diane Arbus Archive at The Metropolitan Museum of Art, New York. More than two-thirds of these photographs -precisan- have never been seen before in the UK". 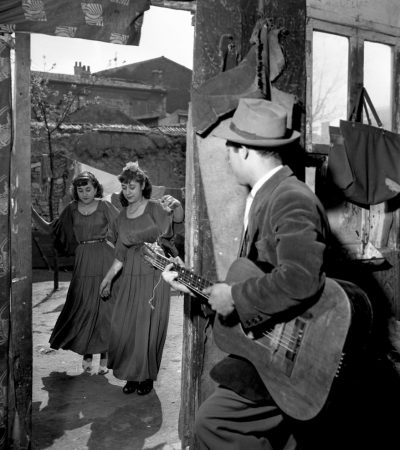 The folkly tone of Robert Doisneau has been celebrated in pictures of only apparent spontaneity, in which life unfolds with an endearing naturalness.

As if time had stopped suddenly, or the viewer was looking through a viewer from another place, oblivious to the flow of the elements there embodied. The artifice lies in the lack of artifice, in the unfiltered presence of the everyday life, fixed forever in a support that we assimilate to our own memory. Among the most popular activities or entertainment -and which obviously present that "only apparent" naturalness- is the musical performance, the thematic axis of the exhibition that can be seen at the Philharmonie de Paris until the end of the month. But in addition to the foreseeable captures of everyday reality, street musicians or rooms in which an instrument lives, the visitor will admire the portraits made to artists such as Julie Greco or the engineer and composer Pierre Schaeffer, father of the so-called "concrete music", who he wanted to show the porosity of the boundaries between music (traditionally elaborated, elevated, required of education) and what is considered as noise (surrounding sound, involuntary, not significant). The confluence of different perspectives on the musical fact -differently fixed in the snapshots of Doisneau- makes this exhibition a must for art lovers.