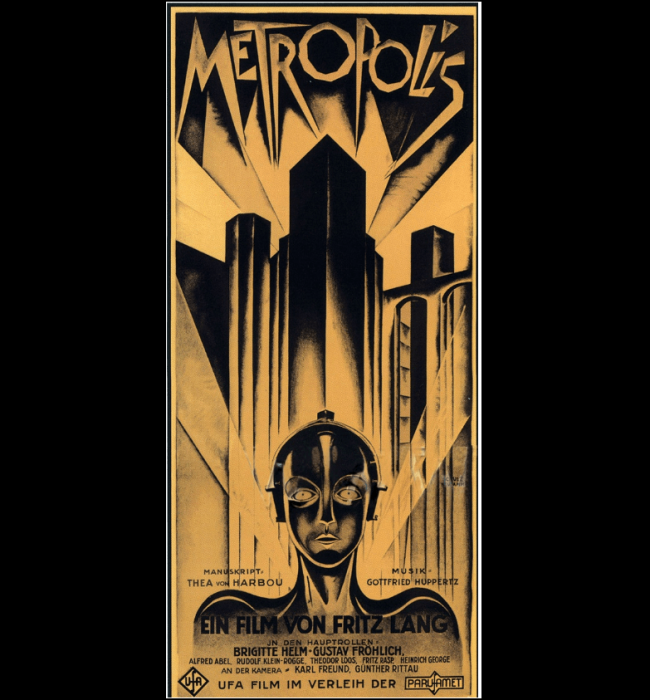 The daily presence of news related to artificial intelligence -comprehensible, given the real possibility of creating or recreating forms of life digitally or in a laboratory- inevitably leads us to one of its first artistic expressions regarding the future of scientific advances, a visionary film made almost a century ago. It is Metropolis’ Fritz Lang that, following a practice happily recovered in recent times, will be showed on the big screen the Aribau Cinema accompanied by live music, specifically with the electronic compositions of the artist known as Morales. A radically contemporary and work, open to various daydreams, due to the dystopian aftertaste of that futuristic film is garnished with references to mythological stories 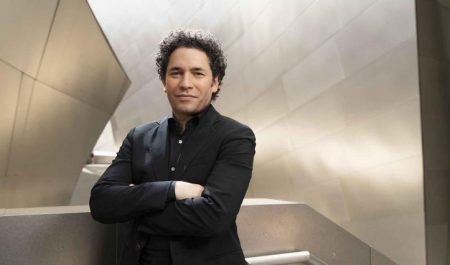 One of the orchestras that caused a major impact last season was the Münchner Philarmoniker, offering a wonderful version of the grandiose

and emotional Seventh Symphony by Anton Dvořák. In addition to the pleasure that supposes to hear it again, also in the Palau de la Música, the protagonism will be focused in Gustavo Dudamel, charismatic director and highly sought after in the main concert halls of the whole world. In case there were not enough ingredients, the programmed work is Gustav Mahler's monumental Second Symphony, a spiritual journey that goes beyond the boundaries of post-romanticism, outlining the doors of that new and groundbreaking way of composing that will be unquestionably evident in the next symphonic monument, the huge Third.

Jordi Savall tends to be related to ancient music, although what characterizes his different interpretative adventures -recognizing sometimes little or no

known scores- is the eagerness to unravel the coherence that articulates them from his actuality. The challenge of playing Beethoven -whose symphonies 1st, 2nd and 4th seem to get out of the classical element with a new fury- will test the best virtues of Le Concert des Nations, a set that in subsequent seasons will continue the interpretation of that beacon of romanticism, which would mark like no other generations to come. 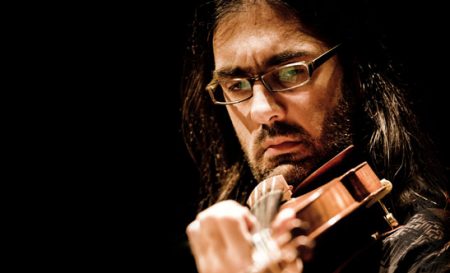 Great closing of the season of Ibercamera, with a high-voltage concert, considering the program and the interpreters. Nothing less than the Vienna Symphony Orchestra and the violinist -conductor, also, on the occasion- Leonidas Kavakos.

A musician recognizable by his implacable rictus and -in the strictly musical field- by the rigor of his phrasing. The concertante piece chosen -the most popular, post-classic but still balanced concert by Felix Mendelssohn- will be completed with that declaration of principles that Johannes Brahms, after many years affected by the Beethoven’s imposing shadow, managed to make public. It is the First Symphony a powerful work full of timbre contrasts, melodically rich from start to finish; in short, an excellent opportunity to say goodbye until next season. A season with some predictably spectacular moments, amongst which of course the visit "finally" of l'enfant terrible Theodor Currentzis playing Mahler. 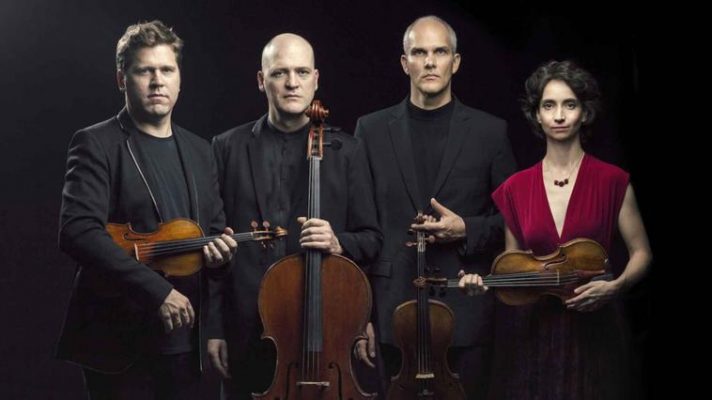 Most commonly seen at the Auditori, it is a real pleasure to hear one of the most important quartets in the world in this edition of Pau Casals’ commemoration day, held at the Palau de la Música Catalana.

The Casals Quartet has been awarded for its recordings and has received unanimous recognition from international critics for its performances in the main stages. The program is made up of one of the teachers of the quartet genre, W. A. Mozart (his work known as "the hunt"), after which a fifth musician, Alban Gerhardt, will join them to interpret one of the most sensational quintets of all times: the enormous, complex and eternal Schubert’s String Quintet, of which is remembered a version with Pau Casals in one of the two cellos. 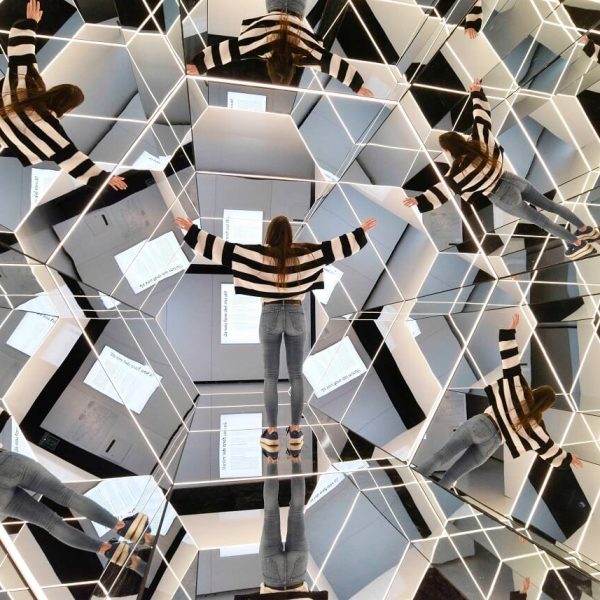 The fascination awaken by the reflection of the self’s image has given rise to narrations and fables from the ancient Greece, being in the modernity when the manipulation of the surfaces, thanks to science’s progress, offers endless possibilities. The Cosmocaixa exhibition represents a wonderful entry into the world of mirror’s reflection, as much as to the investigation of the mechanisms that make the representation more or less faithful of what we consider real -when not explicitly deformed. In the words of the organizers, the proposal sounds even more tempting: "Would you dare to cross to the other side of the mirror, as did Lewis Carroll's Alice? "Mirrors" invites you to explore the reality that there may be in the "inside" and the "outside" of these objects". 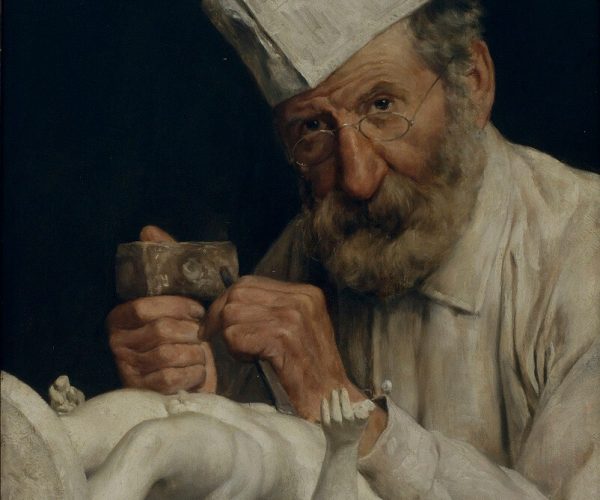 Despite the humility of his background, Antoni Fabres (Barcelona, 1854 - Rome, 1938) managed to study at the Escola Llotja in Barcelona and meant a breakthrough in the art world thanks to a pension

he earned at the age of twenty, to move to Rome and be trained as a sculptor. During his life he would also be highly recognized for his paintings, that the MNAC collects in an exhibition of great interest. Certainly, it is not so frequent to get to know the work of artists that, even if successful along their lifetime, were mostly forgotten afterwards. To contextualize it, the organizers explain: "Historiography has placed the work of Fabrés as the continuation of Fortuny’s with regard to the subject matter, orientalism. But Fabrés cannot be pigeonholed in any specific movement, and although he painted orientalist themes common to many artists in the 1880s and 1890s, or subjects such as musketeers and swordsmen, he also did a lot of realist and naturalist work, which has to be understood as a caustic, critical commentary on society".

Many of the best photographers of the past century have been self-taught, individuals passionate about discovering the possibilities of reproducing and fixing reality on paper,

in an eminently practical way and therefore without theoretical training of any kind. It is also the case of Gabriel Cualladó, who happens to be one of the renovators of Spanish post-war photography, humanizing in a sober but forceful way a bleak landscape, approaching with discretion the intimacy of human relations. "He did not choose transcendent themes, nor the people he portrayed were famous. The scenes captured by his camera are simple, devoid of artifice. His attention was focused on what was closest to him: his family, his friends and the territories frequented in his day to day, in which he found poetry", explain the organizers. Far from imposing his gaze, he allowed it to adapt to reality, to capture with his Leica the most striking of that its specificity. In fact, he said "I do not intervene in the attitude of the subjects I photograph. It is rather the other way around: it is ‘their’ attitude that gives me the key to whether the image interests me or not". 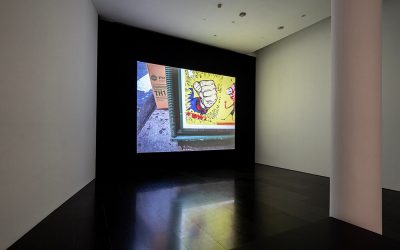 The Swiss-American artist Christian Marclay (born in 1955) has worked on the relationship between sound and image throughout his career, with music being a common element in a large part of his work. A work influenced by

the great rupturists of the twentieth century, the art of Marcel Duchamp, John Cage, Fluxus and the new ways of developing the creative attitude through happenings, also bearing in mind the manifestations of underground culture. Other names with which Marclay’s artistic concerns can be linked are those of John Zorn or Laurie Anderson, both renowned experimenters. At the Macba the organizers explain: " The exhibition will address Marclay’s concern with composition through his recourse to popular culture and mass media, together with his exploration of both traditional and digital technologies, and their material qualities. The exhibition will focus on the manner in which he composes through his interdisciplinary use of appropriation, montage, remixing and improvisation, practices that themselves traverse the boundaries between the experimental and the popular". 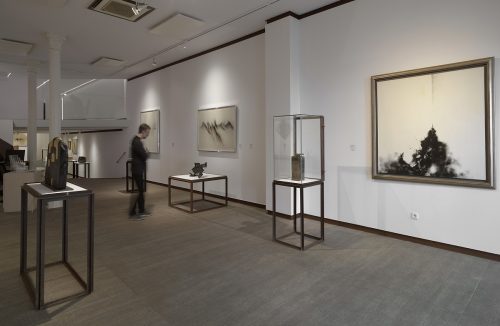 The interaction between Eduardo Chillida and Fernando Zóbel is reflected in the interesting exhibition that the Mayoral Gallery offers until July 25th. Their languages are obviously different

but both are involved in the adventure of an artistic search. Chillida shines for the creation of spaces and Zobel in the non-figurative expression of a pictorial reality that is connected to Rothko’s – the artist confessed his influence. Jordi Mayoral, the director of the gallery, explains that "this exhibition is an unprecedented dialogue, the result of a long process of investigation, a meeting of crossed paths of two key artists of the post-war period". The organizers recall that Zobel "evolved towards the study of light and the evocation of memory, both his own and the viewer's." He himself explained: "essentially I’m speaking of light, of large forms and small forms, of what is far and what is near. Above all I think I speak of memories". In fact, for Chillida, too, the question of light is capital: "In his case his works are plays of matter and void in which light comes into being, assumes its importance and turns into a generator of spaces and volumes".