Eroica, set up in Barcelona by Miguel and Graciela, a couple of entrepreneurs who have managed to make their dream a reality: uniting pasta and bicycles. All this, under the aegis of Eroica, an organization born in Italy that organizes meets of old and vintage bikes in eight different countries: Italy, Spain, South Africa, the United States, Uruguay, Japan, Holland and Great Britain.

his is how our story begins. Every morning I go and get a loaf of exquisite bread—ecological and gluten-free—from a French bakery located in central Barcelona. For a few weeks, a few meters from the bakery, I had seen an Eroica caffé sign and a poster announcing it was “opening soon”. I could not help but think of that word, Eroica. But then, why not? I, who love to confound everything my eyes see, did not quite understand the promotional reason for that particular spelling.

Until that morning. Before the debut of the winter cold, without warning as has been the norm in recent years, I was about to pick up my succulent chestnut flour bread, with Yogui, my unconditional Jack Russell friend, and saw that enigmatic place had finally opened its doors. Guided by the smell of coffee that was wafting out, I decided to investigate with the excuse of my second milk coffee of the morning. I pulled at the round wood and metal door handle—which I will later discover imitates the wooden rims of vintage bikes—and I realize that I have just traversed the space-time continuum between the tedious noise of the city and its cars and the silence of the interior of that new premises.

My first impression: a huge space—exactly 500 square meters in what had been one of the many textile mills in the last century and that had been abandoned in the last twelve years—in the heart of the Eixample district, a pungent aroma of fresh roasted coffee, bicycles all over the premises, many of them hanging from the walls as adornments, a scattering of old cycling jerseys, cycling posters and signs, cyclists and races, Italian ice cream, a pasta kitchen, a cycling newspaper at each table, vintage Eroica apparel… And then I meet Miguel Santalices, the soul of the place who, together with Graciela Nowenstein, has undertaken the project of bringing Eroica to Barcelona. 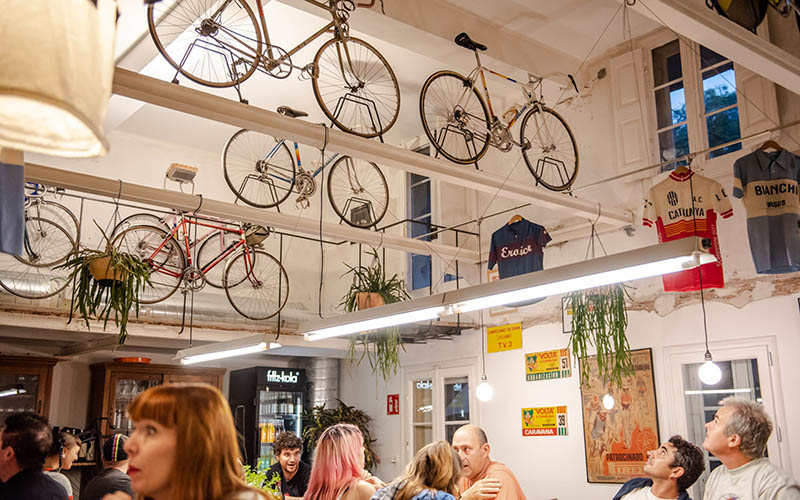 Miguel, whose voice betrays his enthusiasm, reveals what Eroica is about. Eroica is an annual event that brings together thousands of old bicycles in eight different countries—Italy, Spain, South Africa, the United States, Uruguay, Japan, Holland and Great Britain, where the fundamental feature is the enjoyment of bicycles, naturally, the preservation and knowledge of the environment, and the history of the routes: a cycling tour in which neither the finishing line nor the time matters, where the alarm clocks do not ring and chronometers have no interest, where there are neither winners nor losers, only participants.

Eroica’s motto is “the beauty of fatigue”. For 22 years the aim of experiencing the world of the bicycle with the greatest naturalness makes any bike suitable for the encounter

Italian Giancarlo Brocci, the founder of Eroica—who currently manages to gather just in his home-town of Gaiole in Chianti, Tuscany, 8000 participants from all over the world—defined the 92 participants who attended the first meet in 1997 as chasers of feelings and emotions. The goal of this bicycle lover is to promote a kind of cycling that generates respect and also generates bonds between the participants. Brocci stands as a promoter of the preservation of outstanding locations and the salvation of the white roads of Chianti, in Italy.

Eroica’s motto is “the beauty of fatigue”. For 22 years the aim of experiencing the world of the bicycle with the greatest naturalness makes any bike suitable for the encounter, that is provided it has a considerable number of years behind it and its weight is no less than twenty kilos—to make things clear, the most modern bicycles at the event would be authentic, heavy bikes of the 70s. Both men and women can participate. And at Eroica there are women present too—and I say too because there are many. Women who, in their daily lives, often peppered with heroism, come together… One of the participants went as far as proposing Eroica as a UNESCO Intangible Cultural Heritage of Humanity, defining it as “an expression of human creativity that must be transmitted from generation to generation, supported by actions, and be safeguarded by the community in harmony with the environment and its history.”

As our chat continues, curious urban cyclists come in and leave. No wonder, since one of the main characteristics that differentiates this place from others is that here you can come in with your bike and leave it, like a bicy-creche: a real, necessary luxury in this beautiful city which unfortunately has become a nightmare for bike lovers because of the continuous thefts over the last decades. And Sara and Ernest, a couple who have just come in, back this up: “we are delighted to be able to leave the bicycles inside with us while we pass the time here.”

Miguel discovers the nooks of the Eroica Caffé, different atmospheres, from the sofa area where you can read or draw, to the tables where you can eat, or the interior patio. A place whose restoration and design is the work of architects Antonio Castro—the creator of the elegant urban castrobike—and Ana Zubelzu. He tells me about the plants there are, the elevator to offer accessiblity to anyone who needs it, the colours of the walls in the toilets—pink, yellow and red, the colours of the jerseys of the Giro, the Tour and La Vuelta, of the seven employees that make up their current team, their opening times and their wish to make the Eroica Caffé a reference for bike lovers.

At this scenario on November 24, the presentation of the race of Eroica Hispania will be held. This will take place, as each year, in the small town of Cenicero, La Rioja, on the 1st and 2nd of June next year.

There is no music here, as in the cafes of yesteryear. Lovers of traditional cycling, contemplating the pictures hanging on the walls, may recall the feats of the legendary Miquel Poblet, the beloved Melcior Mauri or the more recent Purito Rodríguez. Or the touring cyclists, as far from competition as you get, can also meet here, because the pleasure is in the enjoyment of everything that a bicycle will offer us. One bit of information which I find curious and romantic at the same time, the discovery that in this day and age in which the press is constantly challenged, they are staking on printing a small news bulletin about cycling and placing it on the tables for the benefit and enjoyment of anyone who comes in.

The Eroica Hispania race will take place, as each year, in the small town of Cenicero in La Rioja, on the 1st and 2nd June 2019. The spirit of the Tuscan Eroica will be transferred to this region. Both territories share similarities, since they are lands of vineyards and wineries, of great cultural, historical and environmental interest. There are three routes, long, medium and short, which in some sections coincide with the Camino de Santiago or the Way of Saint James. A perfect excuse to get away from the stress we are used to and to enter, bike in hand, the enjoyment of what is natural and the pleasure of discovering that you are not the only crazy person who wants to savour life at another pace. As Brocci says: “we want people to rediscover the beauty of fatigue and the emotion of conquest.” Because in the end, the important thing is to participate.

Welcome to the Eroica Caffé, that is Eroica. And, of course, in Italian: spelt without an aitch.

These new professionals are amongst the most sought after, both...

Foment del Treball opens up this space to bring to...

A platform aiming to compile advice that has proved useful...

“The wines I like to recommend are those that have...

The city of San Sebastián tops a list of the favourite food...