Some experts believe that the rental market has peaked and that in the next months we will see how its growth is slowing down because, basically, the demand cannot take on any more increases. This 2018 will be key to see how the market evolves. Unfortunately, for the time being, the immediate scenario of this sector is still that of tenants being forced to pack their bags because of their impossibility to meet the increases on their rent.

This is the latest nightmare of the property market and that of many wallets. Renting has been gradually increasing up to 49% from 2013 in Catalonia. This breakneck pace has led to a new real-estate bubble, especially in Barcelona, as renting prices have become prohibitive for many families. But what are the reasons behind this state of affairs? Is this a purely speculative problem? When will renting prices reach a peak? Or, is price regulation a solution? These are just some of the questions hovering over a market that seems to break all records.

But this has not always been like that. In fact, we do not have to look far to find negative renting developments. With the outbreak of crisis, renting and purchasing prices started dropping. Therefore, between 2008 and 2014, most tenants renegotiated contracts and, by so doing, obtained remarkable discounts, even in big cities like Barcelona. According to sources from the Generalitat (Catalan Government), from the outbreak of the crisis until 2013, there was an average decrease of 15% in renting prices in the Catalan capital city, even up to 20%! In Catalonia as a whole.

From 2014 and 2015, and especially from 2016, the situation changed dramatically. Besides, unlike the purchasing market, with poor and occasional rises, the renting market is reaching a sudden turning point, and in Barcelona, in very few months, prices can suddenly rocket. An overview of the following tables from a report issued by the property website Fotocasa shows a detailed analysis in the change of renting prices. 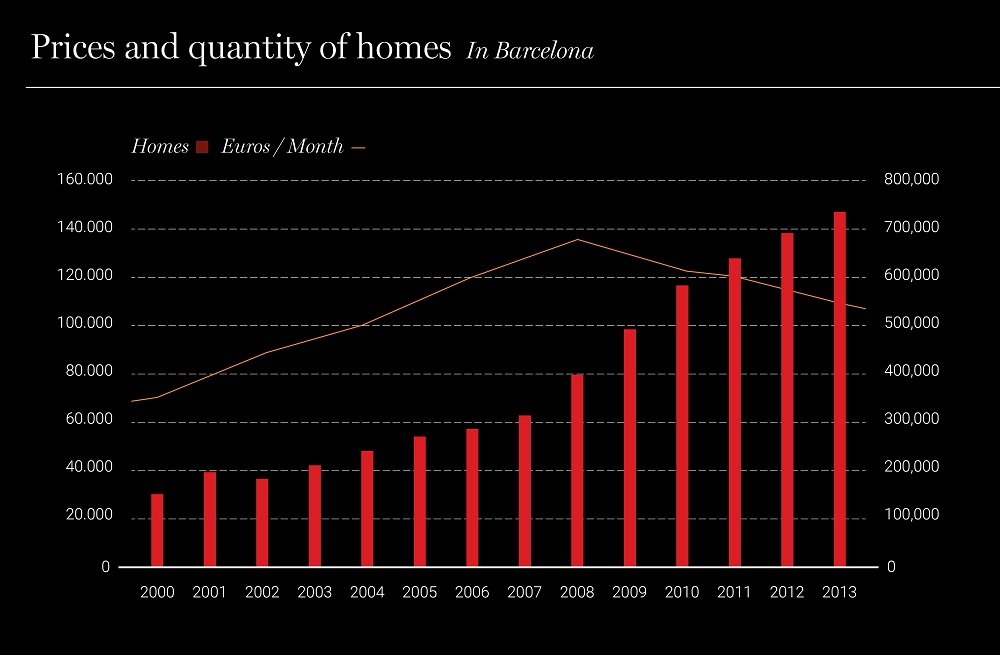 The reasons behind this trend are manifold and go beyond mere speculation moves or the impact of tourist rental, as has often been claimed.

One step at a time. Let’s begin by the factor that has shifted more dramatically in this equation: The demand. And demand has risen sharply in the last few years. How come? On the one hand, because many people who would choose to purchase straightaway, have now been ruled out because of their impossibility of being given access to a mortgage. The demand has increased significantly, in the case of Barcelona, because this city has become the pole of attraction of new foreign residents. Entrepreneurs are drawn into the magnet of its start-up ecosystem, students attracted by its universities, outsiders in search of good weather and quality of life, etc. This group is also sizeable and must be added to the wave of tourists who come to the Catalan capital and prefer to stay in a flat rather than in a hotel.

The impact of this tourism has been often presented as another factor. The thesis is simple: The owners obtain a good return from tourist rental accommodation on a daily or weekly basis rather than with a contract of use. Furthermore, the risk of a defaulting tenant is minimized with tourists. Anyway, apart from the impact of highly-concentrated districts, both experts and most studies indicate that this phenomenon is not the only reason. The Barcelona City Council –a spearhead in the fight against new licences– has approved the study commissioned by the employers’ association of tourist apartments Apartur, released last summer. The report reveals that the number of illegal tourist apartments had gone down by 21% in the last year, while rental prices keep rising and do not seem to slow down.

Let’s focus now on supply. The main problem here is that figures are insufficient to meet a demand that, as we have seen, has done but increasing. This is so, despite many studies showing that nearly 40% of trading in the last year in the city of Barcelona were investment purchases aimed at the renting market. This is an extremely attractive bet, especially if we consider that the low interest scenario implies that having money in the bank has become simply bad business, while rental profits in Barcelona can be as high as 8%. This is why many investors and savers have seized the opportunity to make profit of their money through the rental market. However, this move has been insufficient to generate enough supply.

Neither has the effort, or, better said in this case, the lack of effort been enough for many years, from governments to increase the rental housing stock. For too long governments have focused on trading protected housing and, while some saw the necessity to shift towards renting, the crisis dried up public funds. In the last few years, the formula of coming to agreements with the banks to hand over empty housing for affordable renting has helped increase the supply to a certain extent, but the flats that still burden the banks are located in towns with poor demand.

Beyond the problem of the obvious imbalance between supply and demand, the rental market has also suffered the impact of the reform passed by the Spanish Government in 2013, whose central point is the drop of the contract period from five to three years as well as the cancellation of the two-year extension. The first renewal of this first batch of three-year contracts coincided with a booming market, which added more pressure to the problem.

Another problem of the housing market in Barcelona, and a distinguishing factor in relation to other European cities, is the property profile. While in such cities as Paris or Berlin most rental stock is in the hands of professional businesses and agents, in Barcelona property has an atomized structure and most flats are in private hands. This trend goes against price restraining and in favour of speculation.

All these elements have led to a situation where evictions linked to default on rental payments are higher than evictions caused by default on mortgage repayments. The incapacity to take on current rental prices by most citizens has become one of the main social problems. Because of this, politicians have started prioritising rental prices in their agendas. One of the earliest governments to suggest a solution has been the Catalan government. The former government put forward, belatedly and less intensely than originally proposed, a price quotation index for highly-demanded cities. This measure, which like many others has now been pushed into the background because of the current political situation, was created to put an end to drastic price increase by adding visibility and transparency to the housing market. But one year after its implementation, its impact has been close to null. On the other hand, the Spanish Parliament passed a few days ago a new law that facilitates the eviction of tenants who do not pay the rents of privately-owned flats. The aim is to offer more legal security and, by so doing, boosting the rental market and getting flat owners to make their property available for rental. Now, it is too early to tell whether such measure will have any impact whatsoever on rental supply.

What the Spanish Parliament has rejected is an extension of contracts up to five years, one of the most demanded measures not only by tenants but also by most professionals from the housing sector, as it would generate more stability on the market.

Some experts believe that the rental market has peaked and that in the next months we will see how its growth is slowing down because, basically, the demand cannot take on any more increases. This 2018 will be key to see how the market evolves. Unfortunately, for the time being, the immediate scenario of this sector is still that of tenants being forced to pack their bags because of their impossibility to meet the increases on their rent.

Until its dissolution in 1312, the Order of the Temple...

The e-commerce giant Amazon founder Jeff Bezos is one of...

According to the United Nations, attracting the financial system is...

Producing and marketing homes within demand-based pricing will continue to...

In blockchain, we discover a new world that is more...

In daily life, nobody has a crystal ball and it...

Then, Agbar becomes the first large corporation that restores its...

The giant leap in commercial relations between China and Africa...

In this day of International Business promoted by Banco Sabadell,...