Sitges is much more than a big binge of gore and zombies’ parades all over the place, downtown. Sitges is our great cinematographic event. With 51 editions, and fantasy as its leitmotif, the contest has evolved from being a wilful and friendly International Fantasy and Horror Film Week, organized by four colleagues, to becoming the showcase and scenario for the most popular genre, with more than 200,000 visitors, 600 accredited journalists and 2,000 professionals.
T

he Sitges Festival has grown exponentially in recent years. Some nostalgic people say that it has nothing to do with what was, and that it has become an uninhabitable space for critics and the press, like most top-notch festivals.

The truth is that the great charm of Sitges has always been the ability to find an extraordinary balance between the demands of an international festival (a selection of films worked and carefully considered throughout the year, guests of category, interesting parallel sections and professional meetings, among other things) with a warm and close atmosphere, in which it is not difficult to end up drinking a beer with Guillermo del Toro in the Auditori bar or chatting with Emma Suárez in one of the parties that are organized daily during the festival.

Sitges is a powerful motor and dynamizing festival of the whole audio-visual industry, not exclusively of the fantasy genre. The festival has been a meeting point for creators and has seen the birth of projects, initiatives and various businesses. It has also known the joys and miseries of national and international stars. From Anthony Perkins to David Cronenberg -not forgetting Quentin Tarantino- many stars have left their mark and stories -that may keep you awake all night- in between the walls of the Hotel Calipolis or Melià.

The applause resounds from the Auditori as soon as the figure of King Kong grabs the plane on the screen, and the roars of the large audience are heard at the moment a sadist character pulls out with his bare hands the heart of the supporting actress. While all this is happening, we ask for anecdotes and memories to various people linked to the festival throughout its history. 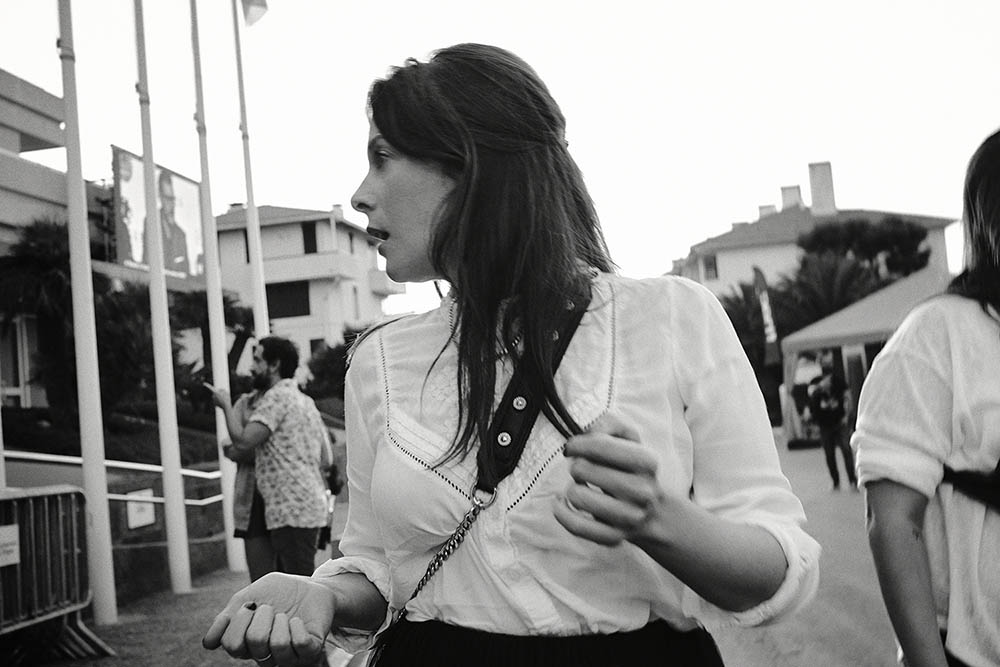 Paco Plaza. Director.
For me, Sitges is one of the best festivals in the world. It is super consolidated but still very close and endearing. It’s a festival that people attend to enjoy the movies. The public always is positive towards the movies and that is not usual.

I met Jaume Balagueró and J. A. Bayona in Sitges. Maybe I would not have made Rec without having attended the festival… For me the most important year was 2007. J. was the one who inaugurated it, with The Orphanage, and then we also projected Rec… And the two of us succeeded. The coincidence was miraculous. That year the important films of the festival were Spanish and, also, made by colleagues… A dream.

Joan Lluís Goas. Producer, journalist and festival director from 1983 to 1992.
I remember the arrival of Christopher Lee. He spent the whole festival rough, distant, speaking only in English, not wanting to say anything about fantasy cinema or about the figure of Dracula, saying that he was an actor and that he had worked with Spielberg. Until the last day, when he remembered filming Vampir-Cuadecuc, with Pere Portabella, and ended up speaking in perfect Spanish and singing Baixant de la Font del Gat in Catalan. Wonderful!

However, Anthony Perkins was difficult to deal with. He was really disturbed, weird, he arrived crossed, in a superstar role that had nothing to do with the situation. And he started to get very angry when we -the organization- refused to go and look for marijuana.
I rather stick to the memories lived with great filmmakers when they were just geeks and lovers of the genre.

Jaume Figueras. Journalist and film critic.
I remember when the Auditori did not exist and neither did the Melià hotel. The venue for the festival was the Retiro movie theatre and many films came without subtitles. In one of the first festivals, I believe that in 1973, a Korean film with subtitles in Swedish was shown while a wilful female voice-over read an elementary translation in Spanish from the projection booth and tried to make all the voices of the actors. Unforgettable! 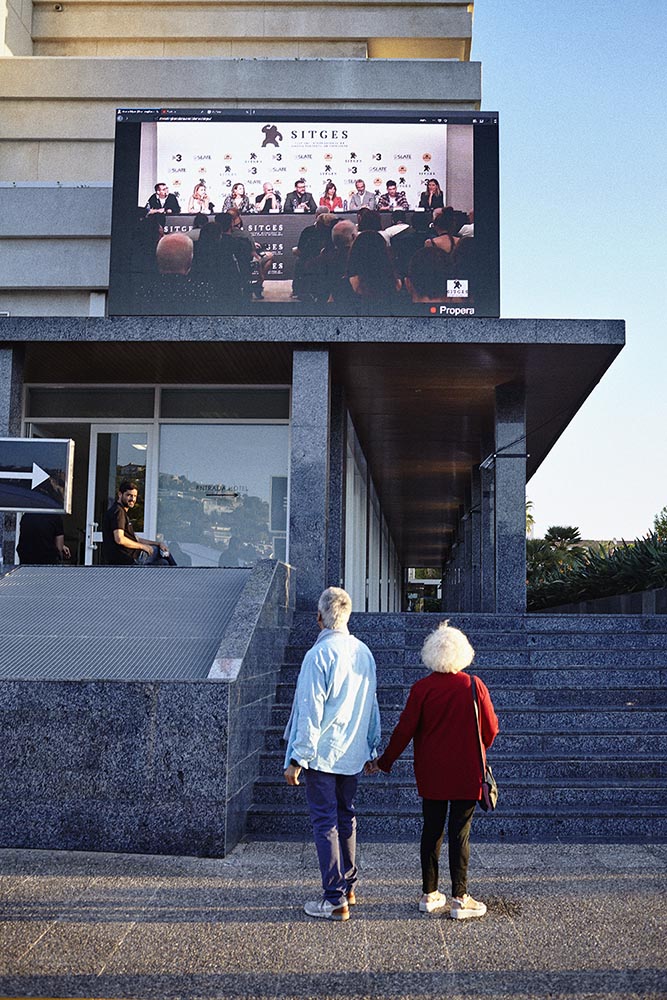 Edmon Roch. Producer, critic and press responsible of the festival from 1989 to 1992.
My favourite memory is surely that of Fay Wray discovering the Palau Maricel on the day of her press conference, and asking for going back for a private visit, that I had the pleasure of offering… I remember taking her to the highest point, from where she liked to smell the Mediterranean and tell me anecdotes of the making of The Most Dangerous Game and Mystery of the Wax Museum, and of Doctor X… But never King Kong… From that moment we met several times and she told me, thanks to her extraordinary memory, anecdotes of filming and of Paul Lukas.

She promised to return to Sitges, because she wanted to go back to the Maricel… I also remember Sam Raimi’s show demonstrating his status as a stuntman when introducing Darkman, scaring the hell out the presenter of the gala and half of the audience.

Pedro Vall. Journalist and film critic.
It was at the beginning of the 90s, and I worked for the newspaper El Observador de la Actualidad. I had an appointment for an interview with Dolph Lundgren. What was I doing interviewing a super tough and muscled guy… precisely me, who at the time was a Filmoteca intellectual, a film geek? Well, I have to confess that talking to the Swedish star represented a lesson for me, and since then I have treated the hipsters’ idols and the mainstream stars with the same rigor. Mr. Lundgren, who filmed and continues to shoot pop-corn films, surprised me for his education and culture, his easy behaviour and, of course, for his exorbitant height and his murderous handshake. My fingers have not regained blood supply since that day. We can recall that Dolph studied chemical engineering and, according to Wikipedia, speaks six languages: Swedish, English, German, French, Spanish and a little Japanese. What about Catalan? Dolph, we need you!

Carolina Lopez. Director of Animac Lleida, Xcèntric and Anima’t programmer, at the Sitges Festival, from 1993 to 2004. Ten years allow many memories to be stored, but these are some unforgettable images.

Preparing with her granddaughter Béatrice-Martin the exhibition La Fabulosa Fauna de Ladislas Starewitch and playing with those marvellous puppets, so old…

Eva Svankmajerová moved, together with Jan Svankmajer, in the exhibition Jan and Eva Svankmajer. The Language of Analogy and visiting with both the cemetery of Sitges.

The day the original drawings by Osamu Tezuka arrived to Sitges for the exhibition Tezuka. The Emperor of the Anime, I could not believe it.

Visiting the Güell colony with Isao Takahata, who came only for the festival.

The Oscar-winning octogenarian Faith Hubley presenting a part of her retrospective on the outdoor screen of Anima’t a la Fresca to the children of Sitges and bathing at the Sant Sebastià beach the next day.

Presenting dozens of artists from around the world at the Cine Prado, including Saul Bass or the Brothers Quay. 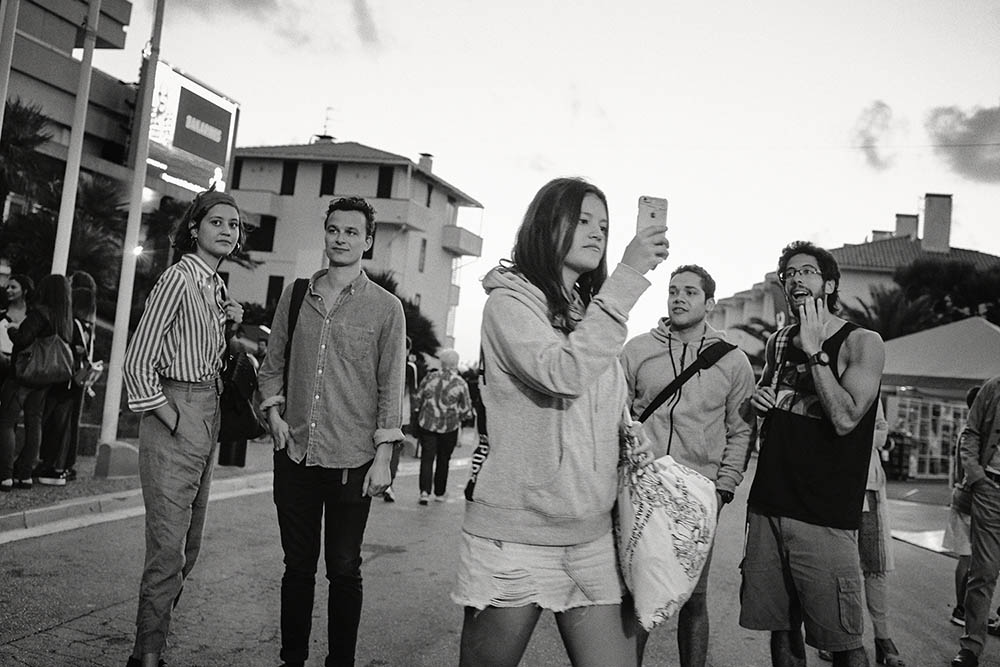 Álex Gorina. Film critic and festival director for five years.
1995 was an unforgettable Sitges for me: my second year as a director, with Ray Harryhausen as honorary guest, Álex de la Iglesia making the Auditori burst with The Day of the Beast, and the audience bellowing against Manoel de Oliveira and his The Convent, one of those titles hated by purists, though not as much as 71 Fragments of a Chronology of Chance by Michael Haneke, that would be awarded afterwards. The spectators wanted to kill me for having programmed it, they chased me to beat me to until the Cau de la Vila. It would take a decade more to discover that Haneke was a genius! You cannot anticipate to trends that much!

But in 1995 it was the year in which Todd Haynes returned to the festival. We had discovered him years before in Poison, and in 1995 he came back with Safe, one of his most secret films. We became very close friends, we fell in love. And a week later I accompanied him in vacation to Lanzarote. I remember going around the island with a rental car listening to all the songs that would end up being part of Velvet Goldmine, his masterpiece, and I remember reading the script with him in the hotel bed, and other wonders that I will not explain now.

Sitges has been half of my life, and sometimes nearly death. But it was also the origin of one of the most impossible and precious love stories you can dream of.

He feels more like a journalist than a filmmaker, despite...

Film, from the beginning a way to portray the unportrayable...

One can speak of a revolution that affects the whole...

Four of the five finalists of the 90th edition of...

I don’t know if you are aware that the first...

The city was a featured part of the 18th edition...