Scorning the opinion of a woman within the family or at work, is violence is a silent violence, but equally hurtful and painful. Thanks to the work, side by side, of so many women, their struggle, and also that of many men, shows a halo of hope for change is emerging to put an end to these barbarities to which society has made us grow accustomed to

hey would be proud to see the mobilization that is taking place throughout the world in 2018. Actions led by people, humans, not only women, who seek love and social justice and fight daily for equality and for women’s rights. Women who walk through the jungle of male chauvinist  injustice, to leave a broad and pure path to those who are now only girls. A path by which they will be able to walk and project their dreams with the same confidence in themselves and in society that men have.

Let us go back ninety years now. This is how the following event was told in 1929, in a brief piece in the section on “The Courts. There is no judicial summary. Events of the year” in the La Vanguardia newspaper on January 1, that very first day of the year on which my grandmother turned 19: “December 27, 1928: In Concordia street, Manuel Riera Gener attacked his ex-girlfriend, Ramona Martinez Montes, causing her three knife wounds, of severe prognosis. The reason for the assault was the refusal of Ramona to resume their amorous relationships, which she was forced to cease because of the violent nature of Maunel. After wounding his ex-girlfriend, he committed suicide by stabbing himself in the chest.” 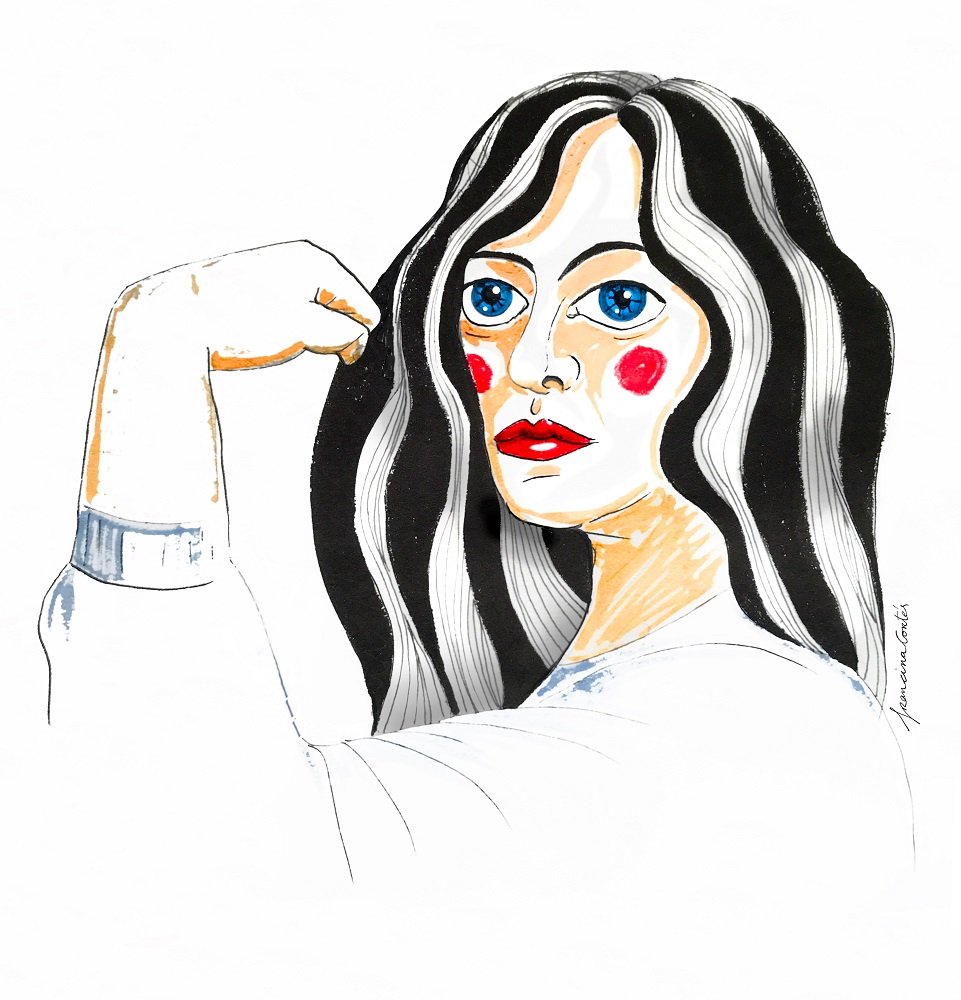 If she had died, her daughters, granddaughters and great-grandchildren would never have been born. And as in the case of Ramona, thousands and thousands more families. That was not an isolated case in that text. There were a few more of the same kind, all cases of innocent women who were attacked or killed by men who did not accept that they exercised their rights as people, to decide who they wanted to love and with whom they wanted to be. This was how it went in that society of the early twentieth century, which unfortunately, a century later, endures in the same way.

For many years now, in which women have been submitted by a patriarchal society, fearing for their lives, fearing for the incontinence of the strength of man—the evil man, rather—dominated by sexist power roles, where misogyny, contempt or scorn has been the common denominator of the lives of many of us. And so it is that women go from beautiful and nice, to bad, hysterical, manipulative, feminazis in an instant, according to their yardstick, because that is the reaction that the male chauvinist has as soon as his attitude is questioned. And that is violence.

“We know full well that you cannot escape the violence without help, that’s why we are here, to accompany the whole process, so that women do not feel alone, that they feel understood. You can break the fear, you can get away”

Scorning the opinion of a woman within the family or at work, is violence is a silent violence, but equally hurtful and painful. Thanks to the work, side by side, of so many women, their struggle, and also that of many men, shows a halo of hope for change is emerging to put an end to these barbarities to which society has made us grow accustomed to.

In 1998 the l’Associació Ca l’Aurèlia, —Aurelia’s Home Association—was established in Barcelona, a team of professionals and volunteers who fight against sexist violence and social inequalities, working with and for women in and around Barcelona. This year, I have had the honour of designing the poster for them, whose motto is Juntes amb una sola veu!—together with one voice—for the activities that will take place on November 25, the International Day for the Elimination of Violence against Women. It is a small NGO, with three professionals in charge. They provide free help to women who need to be able to break with the situations of violence to which they are subjected. “We know full well that you cannot escape the violence without help, that’s why we are here, to accompany the whole process, so that women do not feel alone, that they feel understood. You can break the fear, you can get away.

It is necessary to unlearn everything that the a dissolute life and male chauvinist society has left in each  of the women.” The Uruguayan writer and journalist Eduardo Galeano, who died in 2015, wrote this reflection: “There are criminals who proclaim happily ‘I killed her because she was mine,’ just like that, as if it were common sense and the fairest of all justice and a right of private ownership, which makes man the woman’s owner. But none, not one, nor the most macho of the supermachos has the courage to confess ‘I killed her for fear,’ because after all a woman’s fear of the violence of man is the mirror of man’s fear of women without fear.”

We believe in women as an engine for social change and mutual solidarity is a good way to achieve equality and freedom. Breaking with the concept of victim: yes we can. Sexist violence is a phenomenon that can happen to any woman, regardless of age, origin, sexual orientation, nationality, work

Silvia, why is it called Ca l’Aurèlia?

Aurèlia is a woman who has been with us since the beginning of the association and continues as a volunteer helping many women. She has dedicated her life to fighting for the rights of women and their children, from feminism. Our association at the beginning was created to help women who were separating from their relationships and all of them had as a common factor of violence in the relationship.

How do women come to you?

“Mostly through other women who have already come to the association and know us. Creating what we call, ‘a chain of solidarity,’ in which a woman who was helped here can help others who are in their same situation. They also come to us through social services, hospitals, public centres… and now many through the internet, accessing our website www.calaurelia.cat.

What activities do you have?

“Our direct care activities are individual and group psychological assistance, legal guidance and  telephone information and assistance. We also promote a series of social participation and feminist activities. We participate in the Plataforma Unitària contra les violències de génere—the United Platform against gender violence—and we coordinate with the city council services for women. We have a close, very private, respectful treatment: solidarity among women. Ca l’Aurèlia is a space for growth, liberation, commitment and solidarity, breaking down preconceptions and chains.

We believe in women as an engine for social change and mutual solidarity is a good way to achieve equality and freedom. Breaking with the concept of victim: yes we can. Sexist violence is a phenomenon that can happen to any woman, regardless of age, origin, sexual orientation, nationality, work, etc.”

How does the patriarchal system affect a woman’s call for help?

“Women have always had the role of caregivers for others and at the time we ask for help we do it to care for another person. For example, the case of many women who go to couples therapy, do it to be better with their husbands, not to be better with themselves, or to empower themselves and recover their full potential, but to support their partner and modify everything that can bother the partner. This is how they have educated us. Even today, man is not made to show themselves as weak, and to go to a therapist and accept to open their soul is to be weak, and men have not been taught to do that. It is there, in those roles, where violence is framed.”

Is there any society in the world that is not like that?

“I don’t know, but I don’t think so. Although I am happy to know that the latest anthropological studies suggest that primitive societies seem to be much more equal than now, societies where the tasks were shared by both sexes, children, hunting, care for the elders…. The problem is that the history we come from has been built from the perspective of man: researcher are men, scientists are men… something that women have not been able to participate in until relatively recently, and fear and responsibility as caretakers has made us accept this role.”

“And the fact is that violence is as visible as it is invisible, it hides behind a two faces. It manifests itself in intimacy in many cases, in others it is perceived and even jokes are made about it. A few days ago the Avon Foundation of Argentina launched an awareness campaign targeting men on harassment and violence against women, which has gone viral with #CambiáElTrato—change how you treat[women]. Three spots aiming to show up the different kinds of everyday violence that many men unconsciously maintain in different situations almost daily. Harassment in the street, virtual violence on networks, and domestic violence are the three areas covered by each of these spots. Only two men in each of them, with a minimalist aesthetic and perfect scripts, show us in 30 seconds the true psychological impact of violence generated through the attitudes they show.”

“Abuse is like living in a cage, with a ceiling above or without air, it is violence. Silent and constant violence and that does not kill. Lies. It kills the same. It kills joy, it kill the wish to live, it kill confidence and freedom.”

“Taking photos or videos of intimate moments, without the consent of the other person, is violence.”

Harassment in the Street

How nefarious our lack of memory that makes us forget the love and affection with which our mothers received us at birth into this world. All of them women. Without them, without their love and their feeding, none of us would be here. Maybe if we would remember, these acts of violence against women would not exist.

I trust that the new generations of men will take a giant step and disengage from the dark historical burden that their predecessors have left them. For a better world. May all the effort, love and solidarity brings us to safe harbour. Juntes amb una sola veu!—Together with just one voice!

The change during the last few years has been frantic,...

The artist Leopoldo Pomés has just been awarded with the...

The thrilling lives of Carmen Ballester and Antonia Macià, wives...

The Design Museum of London is exploring the fascinating universe...

The rules have changed. Privacy does not exist anymore, and...

Why is Michiko Kakutani one of the most feared critics...

It seems that, during the 30s, radioactivity had an aura...

Miracles do exist and they come in different forms. Mountain...

The economic situation in Spain demands that citizens clearly know...