The success of the exhibition that the Macba has devoted to the sculptor Jaume Plensa, and that can be visited until April 22nd, has nothing to do with chance. His deeply humanistic concerns point to the spectator. References in Plensa's works to philosophers, artists and poets, explicit or underground, reveal the imaginary inherited and transmitted by generations of creators throughout history: exceptional individuals, of intense personality, who perform the alchemy of formulating the type of truths to which no human being can be alien.
T

wo apparently identical gongs, face to face, with different inscriptions in the center of each of them: “Matter” and “Spirit”. The spectator is invited to make them sound, and participate in a growing vibration, being himself affected. Along with the immaterial aspect that seems to derive from matter, the specular nature of the work suggests the opposite possibility, that under the matter may underly some spiritual foundation. A dilemma is raised by the title of this work, made in 2005; but we do not know if the bar that relates the terms matter / spirit links or splits them. The connection or correlation of both realities is to a certain extent indiscernible, because the whole reality is constituted for the human being in its conjunction, in the limit that separates and reunites, as Eugenio Trías used to tell us. He was one of the first intellectuals whom I heard talk about Jaume Plensa, about 15 years ago. 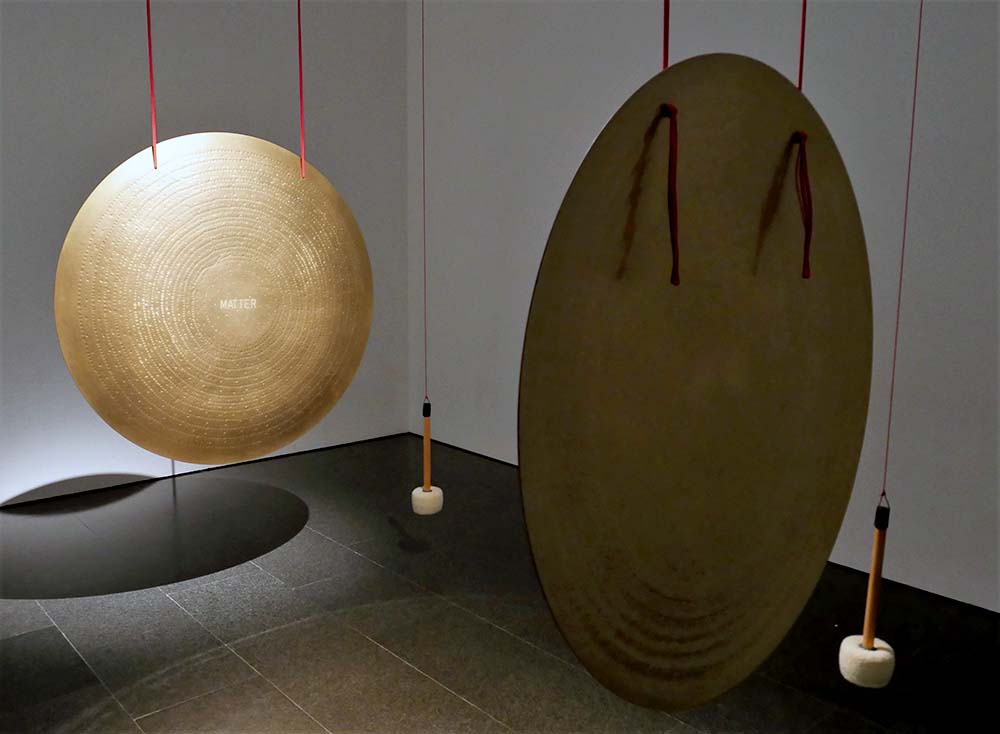 The success of the exhibition that the Macba has devoted to the Barcelona sculptor, and that can be visited until April 22nd, is not at all casual. His deeply humanistic concerns point to the spectator and lead him to revise the meaning of what is unconsciously believed. In the era of “mindfulness”, the function of art is still crucial. It allows a conscient anchoring in the present, in the proper time, renouncing to merely caress the consciences. Art opens questions about the meaning of the work and the viewer in relation to it, avoiding taking for granted the understanding of its purpose. Its relevance is capital. Modestly that is expressed by Plensa in a presentation video: “I’ve said it many times, art is useless, that’s why it’s so important…”.

Such “uselessness” frees art from the need to be accountable. It would seem that it places the creator in the position of the jester, the one of the one who, joking, groping, playing – that is, by parabolic means, always by way of approximation or rehearsal- dares to formulate what directly -seriously said- it would be intolerable and maybe even incomprehensible. Before Friedrich Nietzsche formulated the need to conceive of the game as a very serious task, determinant of his own life, Friedrich Schiller had already written in his Letters for aesthetic education, in the last years of the eighteenth century: “Man only plays when he is a man in the full sense of the word, and he is only entirely man when he plays. This affirmation, which at this moment may seem paradoxical, will reach a wide and profound significance once we have applied it to the double seriousness of duty and destiny. On this statement, I assure, the entire building of aesthetic art and the even more difficult art of living will be founded”. The mysterious threads of necessity –ananke, for the Greeks- are intertwined with men’s free action, in the form of an intensely lived understanding.

Although Immanuel Kant had warned that the aesthetic experience was not a source of knowledge, the generation of subsequent thinkers -among which Schiller, “father” of Idealism according to Rüdiger Safranski- understood that he opened the possibility of transcending the physical world to rise platonically in the conception of ideas. Whether this transcendence is understood metaphysically, or in a much flatter sense and closer to the earth, the question is that the space-time that is inaugurated in the contemplation of pieces like those of Plensa positions the spectator in the center of the game board, without another reference than his own gaze, faced with the question. What may that string of metallic letters hanging jocularly and implacably mean? Letters rotate and thus disrupt the meaning delineated with a random tinkle, a sound that is always new, but which one would say programmed by some cosmic force and alien to human reason. 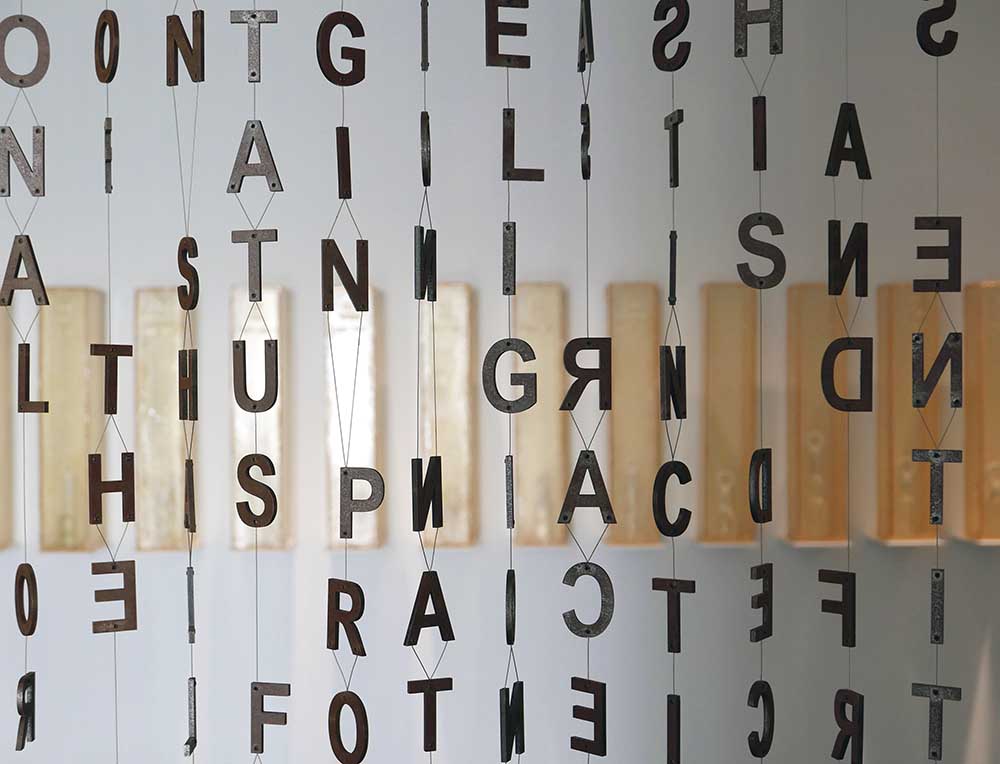 Jaume Plensa enhances the search for answers, from the original -and necessary- recognition of ignorance itself. The effort to decipher a hidden message in his work Glückauf?, made in 2004, will reveal the inherent difficulty in applying what the text says. In fact, it is the Declaration of Human Rights, approved by the United Nations in 1948. The most natural thing -the disposition of inalienable rights since birth- is intricate, indecipherable, and with this, reflection is urgently considered. The perplexity that this work arouses -together with the title, “good luck?”, more playful and defiant than cynical, like the enigma thrown by the jester- emerges from the mysteriousness of its mobile reality. It seems to reflect the constant, or at least potential change of human reason. The free nature and equality of the rights of living beings may seem understandable by every rational being -Kant would speak of the reciprocity that implies, in moral terms- but it is certainly difficult to respect and care for, in certain circumstances.

Well, how to maintain the genuine universality of moral principles, and jump over those circumstances, understandable as “obstacles of human nature” in the words of Königsberg’s wiseman? Art, like philosophy, in many cases allows to denounce, to point out contradictions, to raise questions, rather than to provide clear and distinct answers. A fact that distances it from science. And, nevertheless, it has a language, it employs characters. Those letters, hanging, are not the only ones that the viewer discovers at the Macba’s show. The vertiginous fall is found in the adjoining room: words like “father” and “mother” hang from effigies of orphans anchored in the wall, parallel to the ground. Another of the moments -this time more relaxed- in which the vocabulary delineates a truth that alternates materiality and immateriality transports us to the outside, to a kind of garden. Trees appear embraced by several identical sculptures -the faces of the artist, closed on himself- in a vegetal hug, with names of rivers and classical composers inscribed on his body.

In reality, two different works, composed of molten metal figures, interact speculatively: The Heart of Trees (2007) and The Heart of Rivers (2016). The flow of the melodies that the characters allude to, with distant or related harmonies -like the rivers with “always different waters”, Heraclitus would say – allows the spectator to rest, and to see from the outside the introspection of another, which could be oneself. Transport, the leap over the material requires matter, and although mathematics intervenes – the Pythagoreans knew – the magical, mysterious character inherent in the fact of feeling another and at the same time absolutely united, fused with Being. This self-absorption can be seen in the work Carmela -precise and monumental face in front of the Palau de la Música Catalana- as well as in the series of faces closed on itself -in the exhibition of the Macba, wooden carvings- that seem to notice the inscrutable nature of the person.

Deeply moves that closedness, and the inexhaustible range of nuances in each personality, which in the case of the work of Plensa is manifested by the surprise that the wood offers when being worked. Unforeseen nuances that trace from the maximum randomness the path of the necessary, as Schiller pointed out, making part of that transcendental way, of that fusion with destiny, also to the interpreter or the spectator. To be one with the fluctuating course of time, to assume the presence of the unrepeatable -however inscrutable it may be- does not represent a creed or some kind of postmodern spirituality. From ancient Greece to Nietzschean thought, which inseminates the art of the twentieth century, the yearning that Jaume Plensa expresses has been episodically manifested. More than a theoretical discourse, the humanistic vindication of its art concerns universal and concrete concerns. In colloquial tone, he whispers a truth of great transcendence “the basis of art is to deepen a lot, a lot, a lot in one’s roots. The more inside I go, the more I can talk about you, because we will find ourselves in this deep base”. 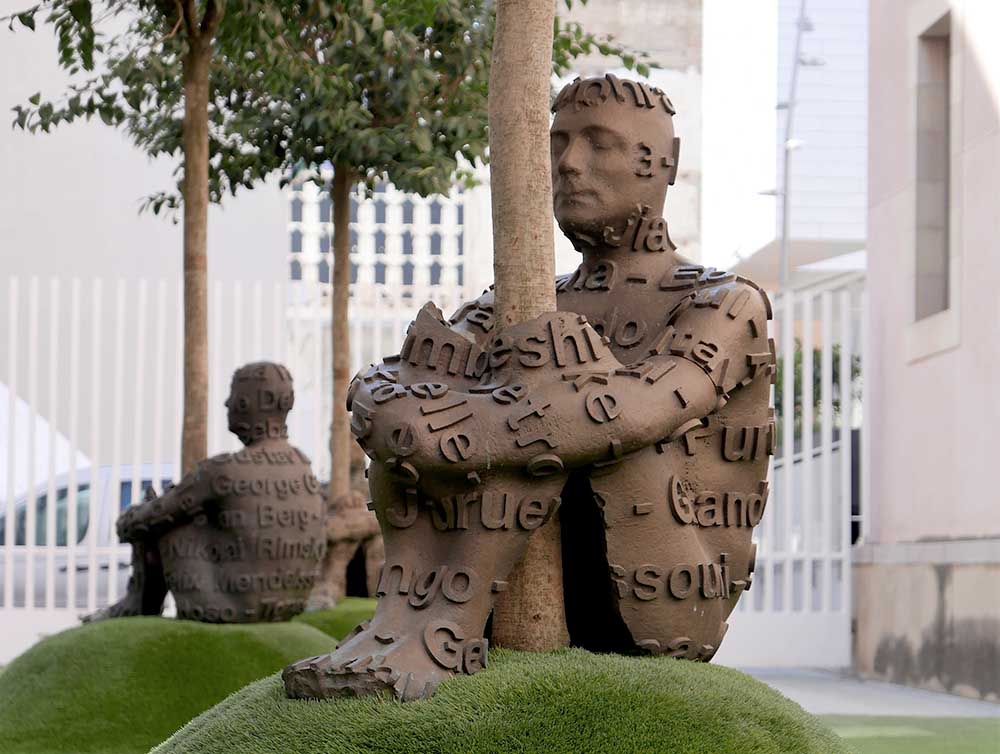 Carlos Pazos, a modern-day dandy born in Barcelona in 1949...

The eleventh edition of the Barcelona Art Fair featured the...

Present in space since the origins of art, sculpture takes...