Jobs related with Digital Marketing and Communication have found a wide-open field to grow and branch out in: the Top 25 digital professions 2018 study published by the Inesdi business school in Barcelona, reveals the difficulties of just finding talent and suitable profiles.

The nature of work evolves as does the social use of the internet, especially in jobs related with Digital Marketing and Communication which have found a wide-open field where they can grow and branch out in. At least that is the trend in employment that is summarised in the “Top 25 digital professions 2018” study published by the Inesdi business school in Barcelona.

“We have lately been unable to cover up to one fifth of the jobs on offer because there is not enough talent ready in the specialisations most in demand: the hardest position to cover is the digital analyst”

The study looks at 313 offers published in the Inesdi job pool —managed by Indigital Advanced— to draw up a labour map of the digital ecosystem, defining which profiles have shown most demand from companies over the last 12 months, and incidentally illustrating the students in the extremely complex art of finding a professional outcome. The challenge is not easy, but there are as yet untilled jobs, and others that are still happily fertile.

According to Inesdi president Joana Sánchez, of the top jobs, data analysis stands out the most: “We have lately been unable to cover up to one fifth of the jobs on offer because there is not enough talent ready in the specialisations most in demand. The hardest position to cover is that of the digital analyst, we have very few people ready here —that’s nationwide too— and we often need to go and look for them abroad.”

On the other hand, of the positions that are being covered, the Digital Marketing Manager stands out: “It is by far the most in-demand job with the companies posting offers in our job bank,” says Joana Sánchez. “All businesses are impacted by their customers, and today their consumer and relationship habits are changing. Where you used to look for business via traditional media, you now need to attract consumers on the net. That is why the need for Digital Marketing Managers has grown so much.”

“In recent years, we have seen a high degree of specialisation in the digital professions. For example, 6 years ago the Community Manager was asked to do everything, but now the position of the Social Media Manager has emerged, and they design the strategic part while the Community Manager deals with the most operational part.”

Twenty-eight percent of the jobs on offer are for Marketing Managers, sixteen points ahead of the next most in demand job. Their function is to design the digital strategy for the company, choose where investments are to be made both in advertising and in the 2.0 ecosystem —do we need to build a website? Do we need an app?— and detect consumer trends in the Internet age, which are very highly conditioned by a fragmented market. In commercial terms, users are bundles of dispersed and interpretable data. Classifiable.

This dispersion calls for a segmented/personalised product offering, which modifies and broadens the labour market. Joana Sánchez elucidates: “In recent years, we have seen a high degree of specialisation in the digital professions. For example, 6 years ago the Community Manager was asked to do everything, but now the position of the Social Media Manager has emerged, and they design the strategic part while the Community Manager deals with the most operational part.” 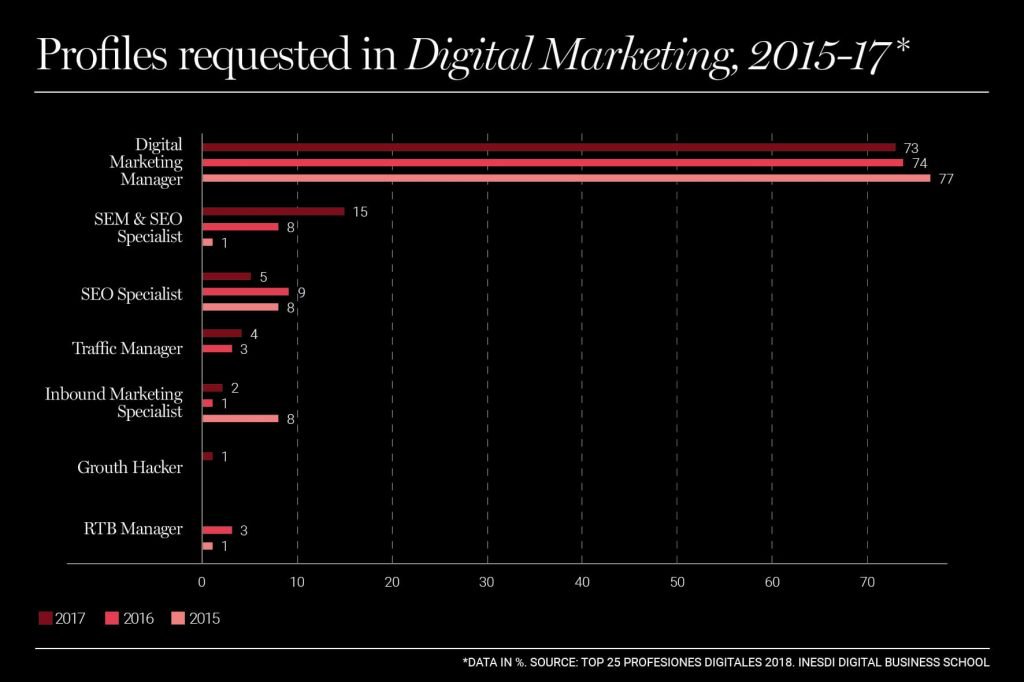 The president of Inesdi considers this specialisation is a trend in digital marketing, but not the only one: “I would say that in all marketing strategies, advertising is falling, while the figure of the Growth Hacker is gaining importance. This position treasures knowledge of natural positioning and technology. Attraction is currently being worked on rather than digital advertising. I would also say that in those cases where advertising is still being explored, audiovisuals have joined the fray as a very clear trend.”

In this context, the rise of Attraction Marketing has given rise to professions that are heavily involved with content, like the Community Manager, who sits just below the Digital Marketing Manager in the list drawn up by the Inesdi business school. A few points below are the Digital Account Manager (9%), Social Media Manager (6%), SEM & SEO Specialist (6%) and Content Manager (6%), a job often taken by recycled journalists. It is no coincidence: many in undoubtedly unstable jobs —like journalism— have found a handgrip in Marketing to hold on to and stay afloat. Does that mean that the world we live in is becoming marketingised?

Joana Sánchez replies: “I don’t think so. In any case it is being digitised, because almost everything we do goes via the Internet. Sociology PhD Silvia Leal says that in 2020 we will be talking with chatbots more than with our partners. The digital world has imposed itself for good and bad, it has favoured the emergence of new jobs and social opportunities, but it has also dehumanised relationships a bit. The more technology surrounds us, the more humanisation there needs to be, and in this sense it is interesting that humanities and arts professions should be incorporated into the digital world.”

An entryway non-commercial professions can get in is through Human Resources. Certain profiles such as Employer Branding or Recruitment Researchers, clearly influenced by Psychology or Sociology, have a considerable field of action on the Internet. The negative side? Companies are beginning to entrust recruitment jobs to robots: “Unilever is already doing it. They have a totally digital recruitment system that banks on artificial intelligence to select its future workers,” explains Sánchez.

The massive leak at Facebook and the Cambridge Analytica case have fuelled the debate on the protection of our digital identity, often auctioned off —with automatic consent— in the grand Internet bazaar. But how do you combine the need for protection with the unstoppable force of Marketing?

That is one of the current fears, of a dystopia in which robots will take over the work of humans. Although there are pointers that this scenario is not entirely illusory, the director of Inesdi has reasons to approach it optimistically: “By 2020, 40% of the tasks in a company will be automated. Jobs will disappear of course, but we’ll need others instead. One example: a couple of weeks ago the first bookshop without any staff, just operated by robots, opened in Beijing. There are no humans attending customers, but there are many behind the artificial intelligence, developing it, analysing data, doing digital marketing. Obviously, certain jobs are going to be robotised, but we will need other professions behind the machines,” says Sanchez.

There is a second concern associated with the profusion of digital systems, and it has to do with the misuse of personal data. The massive leak at Facebook and the Cambridge Analytica case have fuelled the debate on the protection of our digital identity, often auctioned off —with automatic consent— in the grand Internet bazaar. But how do you combine the need for protection with the unstoppable force of Marketing? Difficult: “One of the positions that is growing most is that of the expert in cybersecurity, how we protect our data from attacks perpetrated by hackers. This contrasts with the need to be able to see and interpret the data, so at a school like Inesdi, with graduate programs in Cybersecurity and Marketing, we experience a permanent duality,” laments Joana Sánchez.

To sum up, the labour market in the digital world is experiencing permanent tension that has not settled, because among other things, it is not convenient to do so. The invisible data is useless in business terms, but the total —and surreptitious— exposure discourages most users from participating in the digital circuit. In the end, this compels a kind of beneficial chaos resulting in a series of novel and very specific jobs, positions that as we said at the beginning, offer clear boons in a labour scenario that is frequently congested.

Digital natives have broken into every area of the economy...

Nothing and no one has a purer and more transparent...

Close to 10,000 expats have already benefited from the Welcome...

Technology is like a superpower: if you manage to master...

With technology as an ally and innovation as an ensign,...

It seems to me that universities are quite concerned about...

What used to represent an advantage, having a well-structured society,...

I think that university has forgotten about its humanistic spirit...

Nine months of childbirth preparation leave everything that happens afterwards...