Catalonia, followed by Madrid and the Basque Country, are the Spanish regions that submit most applications for European patents, together representing over 65% of activity. This circumstance is repeated, to a greater or lesser degree, year after year. Catalonia alone actually accounted for 37.6% of total patents in Spain

Last year, the number of European patent applications in Spain grew 7.4%, reaching a total of 1,676, according to European Patent Office (EPO) figures. Spain was one of the countries with the highest growth and almost doubled its overall increase in recorded activity compared to 2016 (3.9%). But despite this improvement, the EPO Annual Report also shows that the country still trails far behind in Europe, well behind countries like Sweden, Holland or Denmark, and that the 1,676 submissions initiated here represented only 1% of almost 166,000 applications to the EPO, originating either in Europe or in the rest of the world.

Catalonia, followed by Madrid and the Basque Country, are the Spanish regions that submit most applications for European patents, together representing over 65% of activity. This circumstance is repeated, to a greater or lesser degree, year after year. Catalonia alone actually accounted for 37.6% of total patents in Spain (with 633 applications and an increase of 15.7% against 2016). The reason for this concentration is closely related to the significant weight of industry in these regions, since it is precisely the need for these manufacturers to export their products that has driven patent submission. It is thus not surprising that the USA, Germany and Japan are the countries of origin that lead the EPO ranking. These three accrued over 50% of the total number of applications.

If the snapshot is extended to submissions for worldwide patents, according to the Spanish Patent and Trademark Office (SPTO) data Spain saw 1,407 filed via PCT (the International Patent System) in 2017, which accounts for less than 1% of the total. In addition, this figure was lower than that in 2016 (down 6.44%). One possible explanation for this decline is that companies focused mainly on European patents, which is in fact where the vast majority of Spanish exports go.

The number of national patents also fell, that is, those that are only valid to protect an invention in Spanish territory. According to the SPTO, this went from 2,849 in 2016 to 2,286 in 2017, that is, down 20%. This decline may be partially explained by a change in Spanish law, which restricts applications. Before the change, the procedure for granting a patent did not require examination of the innovation the invention actually contributed, and it was granted by default. With the regulatory change which came into force in April last year, Spain took a definite step in adapting its legislation to the conditions and requirements that prevail in most advanced countries. This also means many applicants now opt for a European patent.

But besides the overall data on records, other figures can be extracted from the SPTO statistics. One of the most obvious is that patenting in Spain is a matter for but a few, and this concentration also explains why the figures just do not lift off and reach something like the volume of neighbouring countries. Just look at the list of institutions, universities and companies that head the statistics, year after year, at the Spanish Patent Office. The Spanish National Research Council (CSIC), Seat, BSH Home Appliances Spain, Airbus, Laboratorios del Dr. Esteve, Repsol, Fundación Tecnalia, and the polytechnic universities in Valencia, Catalonia or Madrid are always at the top of the lists and their names come up again and again. 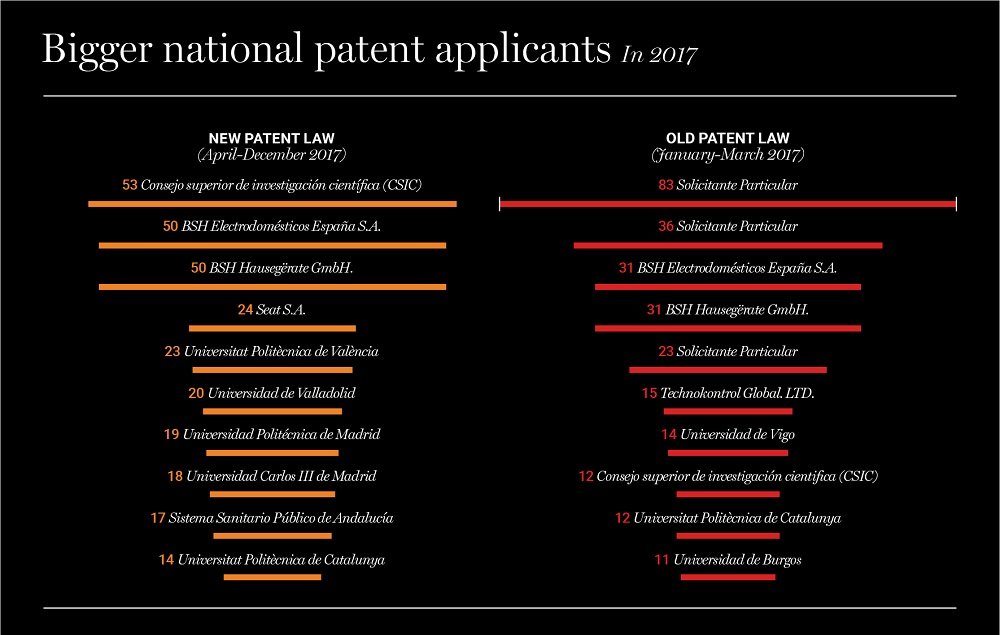 By applicant profile, businesses do not yet exceed 50% of the applications (no more than 43.6% of the total) while universities take 16%, the CSIC and public entities close to 4 % and the rest (36.7%) is in the hands of individuals. With regard to businesses, as with the regular exporters, the group of names that appear repeatedly in the SPTO statistics every year is rather small. And this also explains why it is difficult for Spain to improve its position in the global innovation ranking.

Another element that is interesting to analyse is if you focus just on international patents submitted before the SPTO, the ranking is led almost exclusively by universities and public institutions. Here, businesses are relegated to a much weaker presence. The data is to some extent telling us that the multinationals present in Spain do most of their research in other countries and that what is done here is much more focused on addressing the local market, or at most on Europe.

Let’s focus on analysing Catalonia. According to a recent study by Catalonia’s Generalitat Government, the number of innovative companies in Catalonia has remained fairly stable in recent years. In the period 2014-2016, the Catalan government tallied 7,933, almost the same as between 2013 and 2015 (7,901) and pretty much the same as that recorded in 2010-2012 (7,318). That is for businesses that are not technology-based. In this case, the number of companies that have a strong  component of innovation remains more or less stable around 4,000 in the different periods since 2010. According to the same data from the Generalitat, Catalonia leads the ranking within Spain, with a share of around 22% of the total for business, ahead of Madrid (18%).

As to the rest of European countries, according to this report, Catalonia ranks 12th in terms of the weight of the workforce dedicated to R&D+i related activities, with 1.46% of the total of employees. The average in the European Union is 1.34%. And with regard to the number of applications for patents, the report by the Catalan Government emphasizes precisely the fact that the number of submissions continues to grow further for protection of innovations with international patents, while the number of national patent applications falls. Thus, while European patents have grown 30% between 2014 and 2017, while those limited to the Spanish territory have contracted 31.6%.

With this outlook, the figures seem at least half optimistic and mean that innovation is at least moving in the right direction. But at the same time, there should be certain circumspection as the different statistics tell us that growth is still slow, and despite the positive behaviour of regions such as Catalonia, Madrid or the Basque Country, Spain still has a long way to go. The heavy concentration of innovation in very few players also shows that R&D+i activity is not sufficiently widespread in the business sector. It is assumed that the increase in exports accompanies a greater need to patent. But for now, one can say that invention in Spain is a matter for but a few.

'Música en vena', an association devoted to bringing music to...

Almost a sexagenarian, this start-upper and president of 8wires and...

A program for validating, pivoting and scaling-up the business model,...

The communication strategies of the new economy give us some...

Barcelona's motivation to position itself at the highest places of...

Startup Catalonia at the Catalan Agency for Business Competitiveness (ACCIÓ)...

First edition of Venture on the Road. Over the last...

A platform aiming to compile advice that has proved useful...