Filmmakers or sculptors? Small wooden and wire dolls personalize evil in its purest form in the short movies of Anna Solanas and Marc Riba, a couple of Catalan filmmakers with 13 short films -and increasing the figure-, a voice of their own and an evident ability to disturb and bring out the shadows of the personal and collective unconscious.
I

t is difficult to imagine that small wooden dolls, wire and latex can provoke disgust or connect with the fears that lie buried in the depths of the collective unconscious. But it happens. I invite you to watch Violeta or Les bessones del carrer Ponent. These are two of the most well-known titles of the tandem made by Anna Solanas and Marc Riba, a couple of filmmakers that, since they met at the ESCAC almost 20 years ago, have not stopped imagining, creating, writing, constructing and modelling atmospheres that are already recognizable for those who have seen some of their work. We meet in his little workshop in Gràcia, a basement full of tiny decorated decorations, hours and hours of handcrafted work alive in stories that have been around the world. Indeed, their short films have been watched in more than 1,000 festivals and have won countless awards, although it is not about figures that I come to write here.

Let’s focus on the main issue: How is it possible to transmit such intense emotions by means of inanimate beings? How is it possible that their dolls generate more internal movement than many flesh and blood actors? “It’s the dolls’ magic”, says Anna; “And the kind of animation we do is not realistic, it’s very scanty, it aims the core”. She assures that they reach it by having behind it a story that helps to understand the feeling of the doll and the sum of the smallest details: “Sometimes it is the posture of the eyes with the pause, the gesture of the mouth…”. Because the viewer can be perfectly lost in the reflections in the iris of Violeta’s eyes, or in the decadent makeup of Cabaret Kadne‘s characters.

“Actually, working in animation you can do whatever you want, at the production level. You do not limit yourself, because whatever you want can happen, you can create the kind of character you want… that gives us great freedom”, says Marc

Sexuality and childhood are two of their main topics. Also, war and the destruction that we are inflicting on Earth. The first two appear in Les bessones del carrer Ponent, in which two twin grandmothers united by a perverse relationship embody the character of the sandman but even more terrifying, if possible, and twofold; two fictional characters inspired by a real one from Barcelona, that two centuries ago kidnapped children in El Raval. Darkness always emerges.

This darkness, always present, and a small one with a face full of marks star Cavalls morts; the war seen from the eyes of a child who, in order to save himself from the bombs, enters the guts of a dead horse in search of a heart that is no longer heard. Poetry in its pure state too. Symbolism. Signification in movement. Because Anna Solanas and Marc Riba aim the core and present reality in such a crude way, so scanty, so naked, it would be unacceptable to see their stories with real images. “Actually, working in animation you can do whatever you want, at the production level. You do not limit yourself, because whatever you want can happen, you can create the kind of character you want… that gives us great freedom”, says Marc.

Freedom that can go so far as to hurt, like everything that is real. To which she adds: “We work with inanimate objects, that allows us to deal with politically incorrect topics, and often also involving children. Because it is a subject that worries us considerably, the fact of mixing childhood with cruelty. The technique itself has allowed us to do so and, despite dealing with politically incorrect issues, we have always tried to do it in an elegant way”. That’s why both show a weird face when I ask them if, someday, they would like to shoot with flesh and blood actors. “No no, we would feel…”, begins Anna; “… out of place, that’s another area”, Marc concludes. 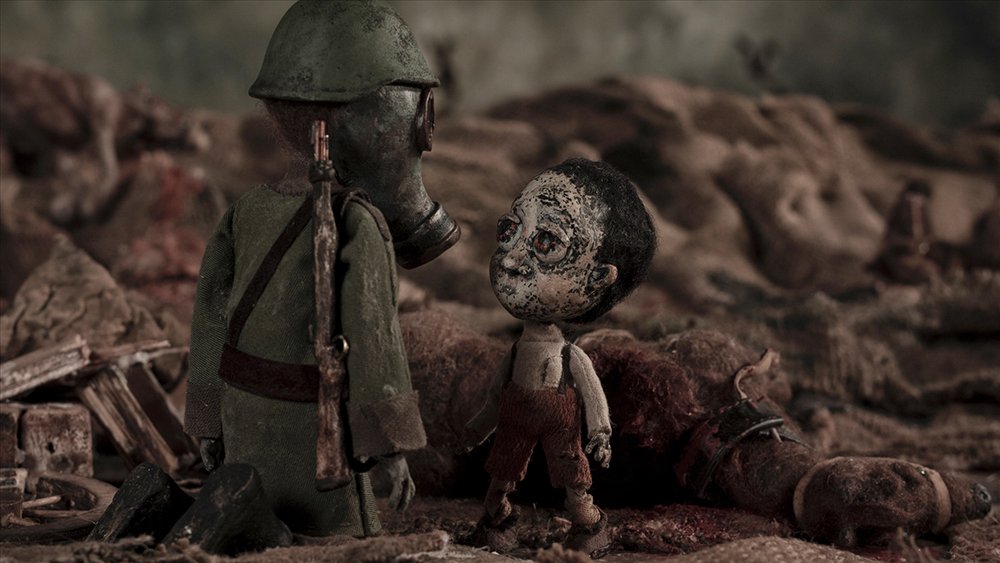 “In the first part of the process maybe we are more filmmakers, when writing the script, planning… but afterwards it’s different, then we are more sculptors…”, says Anna.

And why using stop motion? “We are in love with the technique itself, the artisanal fact, that the results are shown in the same process is something appealing to us”. Marc gives life to the dolls with his hands, which come from a flat design. “In the first part of the process maybe we are more filmmakers, when writing the script, planning… but afterwards it’s different, then we are more sculptors…”, says Anna. Sculptors who build between 6 and 10 seconds of footage per day, sculptors who spent four months for filming of Canis, to which we must add so many preproduction days. In fact, what needs more work is the preparation, previous to shooting: building the story, the doll, the scenery… Build it with your hands, roll with your hands, materialize darkness by tiny movements of eyelashes, eyes and mouth. And reach the guts of the viewer to awaken something that was asleep.

But not everything is dark in his work. Since everything has its opposite pole, Anna and Marc have clearly childish works, a “whiter” cinema that they enjoy in the same way as the darker one, for which they are better known: “In fact we are very childish in a radical sense, we really enjoy the children’s product, the whiter product, and that is why sometimes we do it too”. And where would that overwhelming presence of childhood come from, in their cinema? “I get the feeling that we admire innocence” (Anna).

Since images in movement bring us back to the origin,...

Film, from the beginning a way to portray the unportrayable...

Iván Morales (director) and Pol Fernández (actor) take to the...

One hundred years have passed since the birth Ingrid Bergman,...

A monolith emerges from the marine waters, facing a twilight...

I don’t know if you are aware that the first...

A magazine reported on Rudyard Kipling’s death before it happened,...

From silent films to the great Hollywood studios, from classicism...