The ‘Plaça de la Catedral’ in Barcelona functions as a bypass between the Rambla and the insides of Raval and Via Laietana and the insects of La Ribera. This contrast triggers the following scene: three tourists stop there to decide where to go next

One of the first things that captures one’s attention from the Plaça de la Catedral in Barcelona is its professional passers-by. Hurriedly, they cross this square as if they were already late to get to their target destination. Joggers cross it sweating from the effort; bleary-eyed schoolchildren cross it, skipping going into the Cathedral, and go straight onto the other side. This square functions as a bypass between the Rambla and the insides of Raval and Via Laietana and the insects of La Ribera. This contrast triggers the following scene: three tourists stop there to decide where to go next:

– The Sagrada Família is miles away.

– But look, it is right here –while showing him the map in his mobile–. We are already halfway there. I would go.

– But we have all day. I want to check out the streets.

They finally head for La Rambla. The scene repeats itself with many other visitors who find their way around in Googlemaps or get a fleeting view of the cathedral, at a distance, thinking that they should already be in La Rambla or the statue of Christopher Colombus. After a moment’s observation, it is strangely common to spot visitors looking at the Cathedral from far away, as if they feel lazy about getting closer. Those who stop for a bit longer are groups: now a gentleman, from one angle of the square, coming from Portal de l’Àngel, rememorates the Roman legends rooted in this historic space and the temple, built on the foundations of a Paleo-Christian and a Roman basilicas; now an enthusiastic guide insists on getting her follower-students to jump at the Cathedral footsteps to get them on photograph, after reminding them that it is from the Gothic period and was finished in the mid-15th century.

These are not the only performances we can see on the square. The eternal occupiers of this place are the street performers who try and get some income. At one end, next to the poet Brossa’s letters of Barcino, at the foot of the Roman walls, two guitarrists offer a peace concert. But now these letters are slightly hidden behind the large flower pots at the entrance (safety measures?), also used to lean on. At the other end, far from the new age guitars, a threesome ensemble plays a lively tune: piano, saxophone and banjo playing cool jazz and passers-by can’t help but do some dance stepping.

Between these two musical styles, other small businesses have their own heyday: a woman dressed in a sort of paper dress of roses offers to pose with tourists and take photos of tourists holding her bouquet of flowers. Another woman, with her face painted in white, like a mime, also tries to make some money using the same method. This girl changes her face when she notices that tourists do not pay any attention to her. I’ve seen her painting her face in front of the windowcase of a shop, in Boters street, on the way to the square. As she was putting on the make-up, some maintenance workers were wiping white graphittis on the window. The mime and the workers were dressed in white. I think this coincidence means something. Amidst the musicians, the mime and the bouquet of flowers, a bike-car driver looks from a distance, sitting casually, launching his mantra messages waiting for someone to take the bait. Sooner or later someone always takes the bait. Other character are the man making soap bubbles and the one selling selfie sticks. I wonder if there is anything more frustrating than taking a picture of oneself, with a one-kilometre-long selfie stick, like that girl faking a grin to the camera. Bored to death, the man selling selfies sits on one side of the staircase.

It’s now January, a weekday, and by one midday there is a small queue of visitors waiting to get into the cathedral. Perhaps because there is no hustle and bustle that indicates any specific meeting point of touristic interest, some erratic gestures take place: a woman takes a photo of the Diocesan Museum building, to the left of the Cathedral, the one that bears the sign “Gaudí’s tour starts here”. There are some who prefer to stop and hang around: next to the buildings opposite the Cathedral, sitting on the rows of benches, the tourists take a break or eat a sandwich, an elderly man reads the newspaper, two more elderly men –cap and walking stick– tell each other past stories … and notice a man who, lovingly, lifts his wife from the wheelchair, holds her hands while their daughter captures the moment in her camera. There are also those who envisage their own life plans. Near the Diocesan Museum, a couple of teenagers talk about their future plans:

– The key is eating less quantity and more in one go. Sometimes I have lunch at four and dinner at seven. If I ate less food, I would definitely shape up. So all the girls tell me –his partner nods in agreement. And goes on:

– Yeah right, but this might not be the point –his partner now hesitates.

– You know what it is? The more I smoke, the more hungry I get. When I finish lunch and then smoke, I know I will eat even more later.

He highlights every single word and then, parsimoniously, lights up another cigarette. 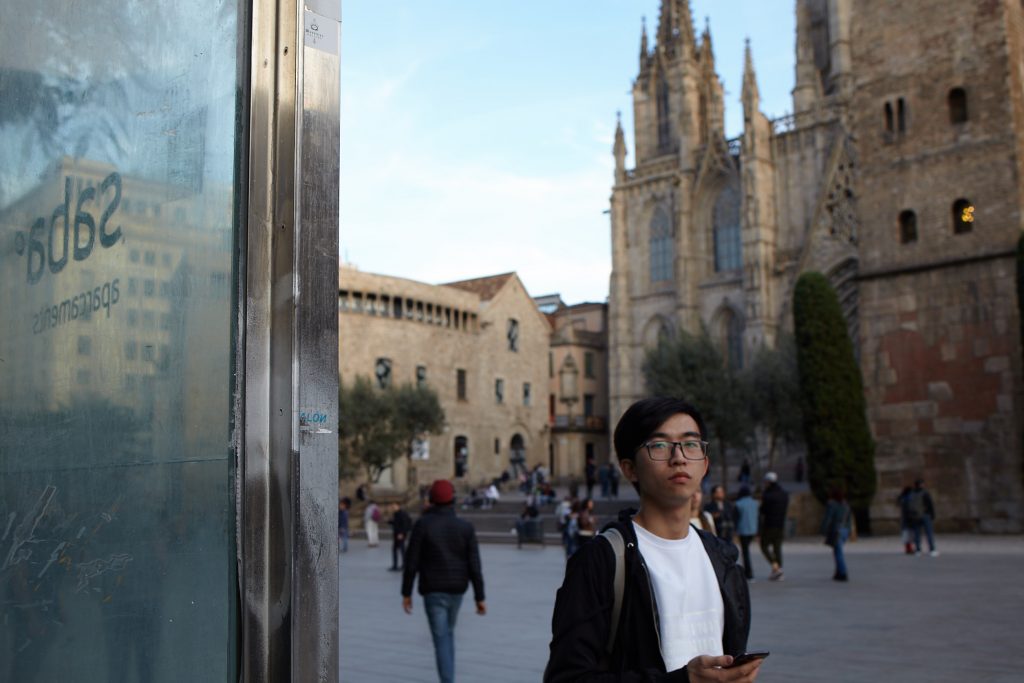 How do you build a good online reputation? “We meet...

Photographer, Audiovisual maker and Art director, her images are an...

Nearly a decade of recession doesn't end without leaving scars,...

Clark is photographer and filmmaker born in Oklahoma, one of...

Nowadays, to find out how a friend in China is...

Growing up in a community today is about living in...

The protagonist of the movie Rounders, Matt Damon, taught us...